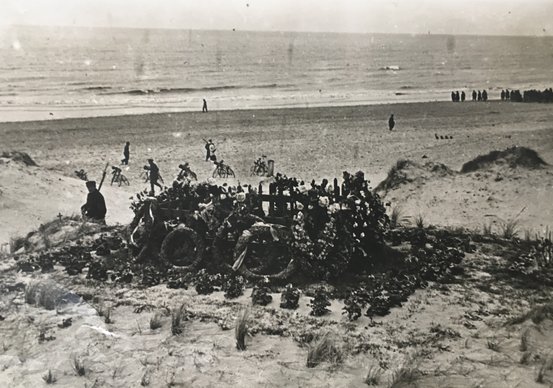 THIS ARTICLE TELLS THE STORY OF THE MILITARY HOSPITAL L'OCEAN AT LA PANNE.

Hotel L'Ocean was a summervacation hotel build in 1904, with four floors and 37 beds. It was owned by family Huysseune in La Panne.

Queen Elisabeth was the founder of the military Hospital in 1914 and had previous given a wing in the Royal Villas for the wounded. Because of the increase of casualties a new location had to be found and she commandered the Hotel L'ocean for her new hospital. One of the major founders was Doctor Le Page, who turned the hotel, under the supervision of Queen Elisabeth to a Red Cross hopsital. The financial support was given as a task to Major Gordon, and the hospital was mostly funded by British gifts. The Belgiam army delivered for the staff and needed vehicles.  A second task for Major Gordon was to buy most of the equipment in London, because the Queen always wanted to use the best materials. Because of Dr. Depage's relationships the hospital was wel supported by highstanding personel. This was ... for the staff of the 'Service de Santé' of the Belgian Military under command of General-Doctor Melis. On many occassions had the Royal family to interfere with both doctors. Doctor Depage, who was a Colonel-Doctor, surrounded himself with a permanent team. He chose his doctors from the mobilised Belgian troops. The nursery was occupied by woman from the nurseryschools from England, Canada, US and Denmark. The entire personel was housed in some twenty villa's in nearby area. The hotel had some 100 chambers over 5 floors, and the hospital was provided with some 200 beds, but could be extended to 2.000. The hospital had two operationrooms, this was done to aid the heavily wounded, that where brought in by the Red Cross at once and decrease the deathly casualties. Many of the personal where specialist's in skull, chest, abdomen, fractures, etc. There was also dentist and biomedical laboratry. 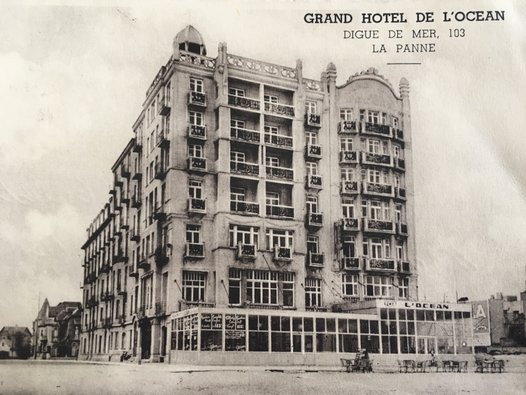 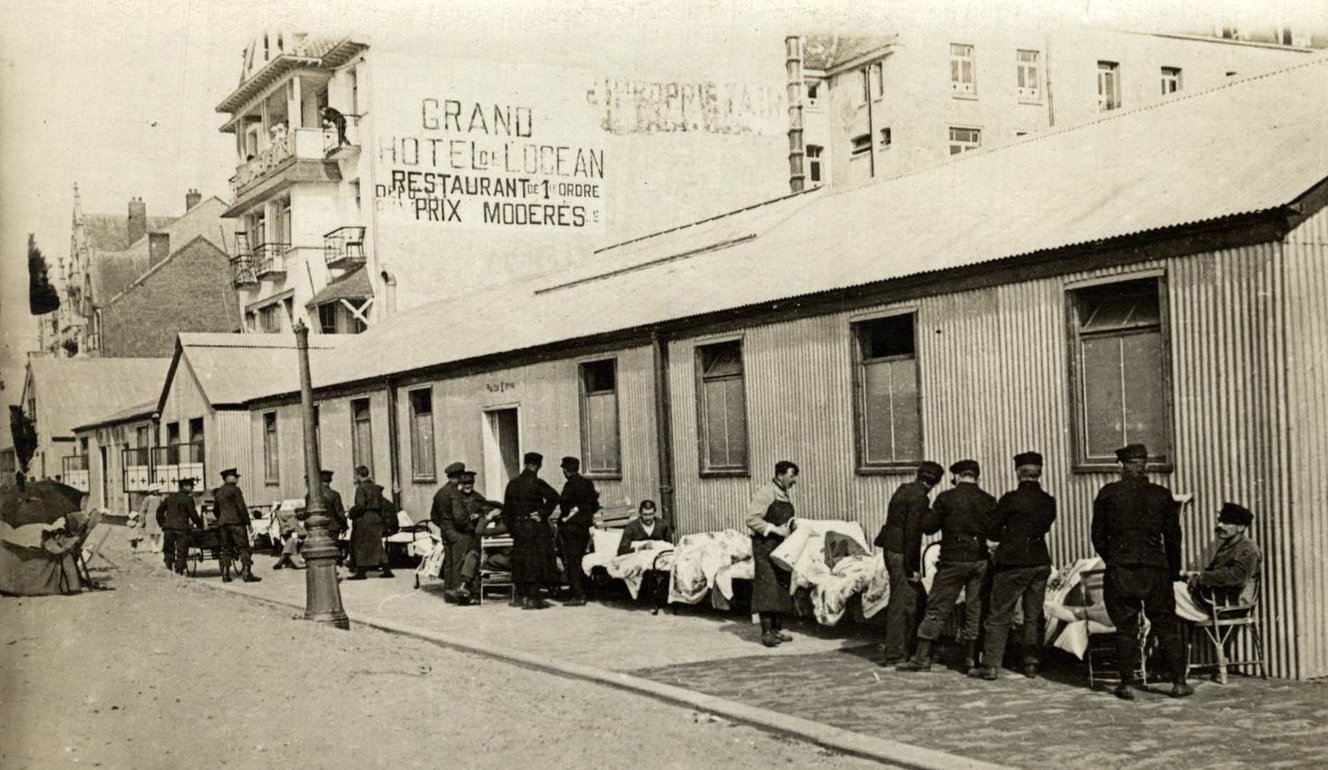 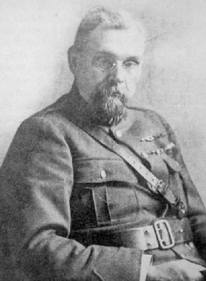 Antoine Depage was born in 1862  at Bosvoorde, Belgium. He grew up in a family of local notables who were active in the agriculture and merchants. His school studies were not magnificant and teachers call him a undisciplined student. After his (difficult) graduation, he choice to work on his parents farm, but this was whitout consent of the family Solvay, who were neighbourgs of the Depage family. They encourage him to go to the university, and he choice to take courses in medicine, because the entery money was the lowest in this courses. In 1887, in his own surpise, he graduated as a doctor. 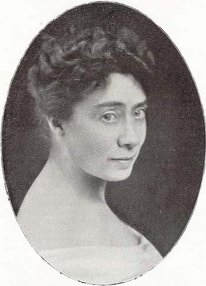 
Marie Picard was born in 1872 at Elsene, Belgium, as the daughter of Engineer Emile Picard and Victorine Héger. Marie met Antoine Depage, because of her uncle, who was a medical tudor in the University of Brussels. The couple later married in 1893 and had three sons.

In 1903 established Marie and her husband the surgical institute at Berkendael. The institute laid the basis to the first Belgian medical school in 1907, which was let by the later martyr Edith Cavell.

During his studies he was teached by Paul Héger and fell later in love to his niece, Marie Picard. Antoine and Marie married later in 1893.

Between 1890 and 1913, Antoine Depage practicesed his profession as a surgeon. He testifies about the bad cares of the patients in the hospitals, and hereby establishes a first nursingschool at Elsene in 1907, called 'L'École Belge d'Infirmières Diplômées'. The nursingschool was led by the famouse and later martyr Miss Edith Cavell. 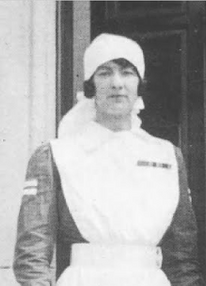 Dorothy Liddell was the sister of Victoria Cross winner John Aidan Liddell who died at La Panne. Dorothy worked after her brothers death in the hospital L'ocean till the end of the war, urning her the M.B.E. Her lifetime ambition was to became an archaelogist and she had the opportunity to be part of the excavation at Windmill Hill, Avebury from 1925 till 1929.

Alexander Keiller, a scottish archaeologist, dedacted the museum, that was erected in his name to Dorothy Liddell, short after her death in 1938.

During the Balkan war, Picard left with a medical unit and servec in the hospital Tach Kicha in Constantinopel. Her oldest son served also with a fieldambulance.

At the outbreak of the war, Dr. Depage en Marie Picard established a military hospital at the Belgian Royal Palace. Later the couple will establish two more hospitals in Calais, where the Belgian medical units where situated. After the German where halted at the Yser, Queen Elisabeth asked the couple if they would establish a military hospital at the L'ocean hotel in La Panne. Dr. Depage and Marie Picard worked close together with Major Gordon to get supplies in London. Marie Picard, later left to America for the funding of the hospital, and achieved in getting a substantial amount of money. She returned in May 1915 with the Lusitania to Europa. The ship was later hit by a German torpedo. Marie Picard, together with doctor James Houghton aided the passangers into the lifeboats and nursed wounded sailors and the boxer Matt Freeman. When the water reached the upperdeck, she jumped in the water, but got stuck in a net and drawned. Her body was brought back to La Panne where she was burried in dunes, until she was reburried in 1920 at the cemetary of Bosvoorde. 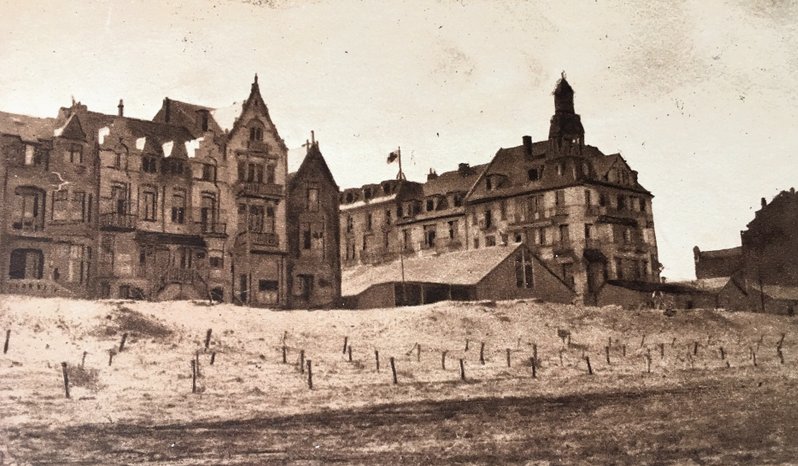 L'OCEAN HOSPITAL WITH THE RED CROSS FLAG AND BARRACKS IN FRONT