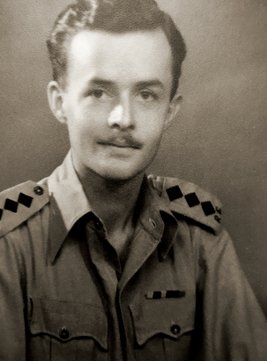 Cyril Vivian Eagleson Gordon, son of Ronald Eagleson Gordon was born at Lahore, Pakistan on 1 May 1922. He was educated at Wellington College and later Cambridge University. On 28 December 1934, Cyril went to Bombay, India with the Peninsular and Oriental Steam Navigation Company and boarded the Kaisar-I-Hind in London. Five years later on May 5, 1939, Cyril returned to England with the Bibby Line S.S. Oxfordshire which he boarded in Rangoon, Burma. In 1941 Gordon was granted an emergency commission in the Royal Corps of Engineers and was posted to King George V's Own Bengal

In February he led six men and a small covering party of infantry on a raid on the Japanese lines of communication six miles behind the front line. They destroyed two bridges and laid anti-tank-mines. The following month, when the enemy had established themselves on a wooded knoll known as "the Pimple", his camp 400 yards away at Kyauktan came under heavy fire. He defended the position for seven hours and supported the infantry counter-attack with fire.

In the withdrawal from the Htizwe-Kyauktan defensive box, Cyril was in charge of the ferry. After getting all the troops across the river, he returned to recover any equipment that could be salvaged. Then he got all his boats away to Taungmaw where he used them to evacuate the wounded. He was awarded the Military Cross for these actions.

In March 1944, during the Second Chindit Campaign, elements of 77th Indian Infantry Brigade established a fortified base near Mawlu, which became known as "White City" from the myriad parachutes hanging from the trees. They blocked the road and railway at Henu, which severely weakened the enemy's lines of communication. On April 6 the Japanese retaliated with an air raid on the White City stronghold, followed up with a bombardment by field guns and mortars. Cyril, then a captain serving with 89 Field Company RE, was attached to 3rd Battalion 6th Gurkha Rifles and was leading their commando platoon. He was ordered to move his men from the woods in small groups and ambush any Japanese attempting to withdraw northwards from Henu. In the early hours of April 7 they were attacked in strength by the Japanese. Cyril was shot in the shoulder and lost the use of his right arm; but he continued to direct and encourage his men and, after intense fighting, the assault was beaten off and the enemy withdrew. For this, he was awarded a Bar to his MC. 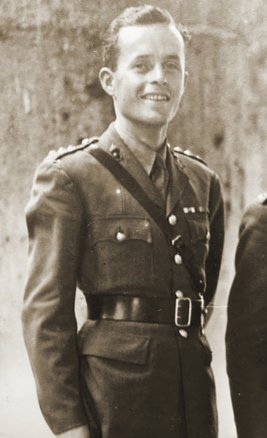 After being wounded in Burma, he was evacuated to India and when the war ended he moved to Malaya, where he served as a district officer. He was then granted a regular commission and attended Staff College. In 1951 he married Clara Duse and received two sons and a daughter later on. Subsequently, he served as an exchange officer in the Munich Engineer school and in Italy in 1976 because of earthquake disasters and ended his career in Cyprus Aden and BAOR. He retired from the Army in 1977. An accomplished linguist (he was fluent in French, Italian, German, Malay and Urdu), Gordon's interest in different nationalities and cultures was carried into civilian life.

He travelled widely, propelling his folding canoe down the rivers of England and Germany and the Adriatic coast; his family recalled caravan holidays in the Alps, on the Mediterranean and skiing in the Dolomites. Settled in a Wiltshire village, he was an enthusiastic rambler, gardener and local historian, an active supporter of the University of the Third Age and the English Speaking Union. He had a quality of stillness which puzzled his grandchildren. Asked to account for it, he explained that it came from years of handling dynamite. In 2002 he became a member of the  Burma star memorial.  Cyril Gordon died on January 9, 2007 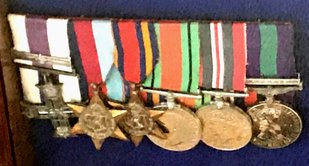 During the night 6/7 April 1944 three platoons of 3/6 Gurkha Rifles were ordered to move by dispersal groups from Thazi woods to the north of the Henu block and to ambush any Japanese withdrawing north from the Henu block. Capt. Gordon was in command of the Commando platoon. During the early hours of the morning 7th April 1944, this Officer’s platoon was attacked by the enemy. Capt. Gordon was wounded early on in the fight, but continued to direct his platoon, encouraging them by his cool presence and complete disregard for his own safety.

As a direct result of his actions, the platoon beat off the enemy who withdrew in confusion.

During the withdrawal to the Henu block, Capt. Gordon although deprived of the use of his right arm was right up at the head of his platoon, encouraging and cheering his men.

Throughout the campaign this Officer’s conduct has been of the highest quality.