THE BIOGRAPHY OF MAJOR A.A. GORDON

The project we got involved in, was one of the best projects I have ever had in my many years of research and collecting. A true friendship was made between the Gordon family members and many further opportunities for exchange have developed. The research brought me to the English archives, previous articles on the internet, visiting other various important related areas of interest and most of all reading Major Gordon's memoirs in his book 'Culled from a diary' that was published in 1941. During this research, I was amazed to find out, how important Major Gordon had been for the Royal Family of King Albert I and many Belgian and British units. It was a journey into the unknown and I had the utmost fun and privilege to be involved with the (re)discovery of this story. The second pleasure I had was that of discovering all the people Major Gordon had met and worked with. Persons as, General Charles G. Gordon, Arthur Wellesley - 4th Duke of Wellington; Colonel and later General J.E.B. Seely - Lord Mottistone, Mrs Knocker and Mss Chisholm, Mr Savage, Captain-Commander Davreux, Captain Hennell V.C., and many he had met at the front, were names that came as magic to me, because of their importance during the war or during the lifetime of Major Gordon.

One of my greatest pleasures was to read the book 'Culled from a Diary', which really tells the details of Major Gordon's life and gave me a wonderful insight into the man as he was and how his personality had made a perfect match with King Albert I of Belgium. Because of their fidelity, respect and honour for each other, their bond was forged into their lifelong friendship, involving trust and support for each other during one of the worst conflicts in human history which resulted in death and shame.

Major Gordon lost his three sons' and a grandson during his lifetime, the first on his second Christmas day in 1893, is the twin brother of William Hyde Eagleson Gordon who himself died during the second Battle of Loos in 1915. Maj Gordon’s last son Edmund died in 1934 after a long illness due to wounds sustained during the First World War. These events must have been one of the saddest and most dominating effects on his life although not many historians are looking into the emotional and physical pain of events like these. I have found much strong emotion and understanding in the written words of Baron Ferdinand Rothschild about the physical transfer that happens with a person when losing someone you are attached to from their childhood onwards and then lost by tragedy. It is natural that this lost person in older years will become more attached to you, and deeper loved and eventually grown so in someone's heart that the only wishes, cares, joys and sentiments a man can possess about his children, would be directly or indirectly wound up with their existence!

Major Gordon most definitely deserves the salute he was given by King Albert, the entire royal family and my fellow countrymen on the 22nd of November 1918 in the streets of Brussels. He also deserves our gratitude and respect, because the band between King Albert I and Major Gordon, which stood by radian companionship, stand-fast ranks of power and the glory of both nations. These two men have lived in such splendid valour and honour that they must have greeted each other in the Beyond, with the upmost Chivalry!

Archibald Alexander Gordon was born on the 3th of September 1867, as the second child of Dr William Eagleson Gordon and Emily Dick. William Eagleson Gordon (Sr) married Emily Dick on the 12th of July 1865 in Edinburgh, Scotland and the family lived at Riddles Entry 35 New Street, Edinburgh. Archibald Alexander Gordon was five years old when his father suddenly died at the age of 51 on the 15th of January 1873. Emily Gordon then moved the family to Switzerland and remained a widow. The family took up residence in Ouchy, near Lake Geneva. Archibald and his older brother William went to the same school as the nephews of General Charles G. Gordon (‘Chinese Gordon’), who was famous for his actions in suppressing the Taiping uprising and later the siege of Khartoum, against the Sudanese Mahdi in which he was killed. General Gordon visited Lausanne and taught the Sunday class for several weeks. His way of teaching inspired Archibald and many others. Archibald also met with General Gordon outside of school hours near the lake where he told many of the students some amazing stories.

Archibald founded, together with Sheriff James Ferguson of Kinmundy and another friend, a volunteer battalion that later came known as the Ninth (Highlanders) Royal Scots. Because of hostilities in South Africa, Gordon volunteered for service, but his request was denied and instead, he was made Honorary Secretary to the Edinburgh and East of Scotland Field Hospital for South Africa. Later on, Archibald became secretary of the Franco-Scottish Society, a post which earned him Knight of the Legion D’Honneur in 1898. Archibald Alexander Gordon enlisted in the army prior to 1896 but the exact date we could not find. In 1896 he was appointed a member of the Royal Company of Archers, King's Bodyguard for Scotland. The unit had a ceremonial purpose for protecting a British monarch during a visit to Scotland. We found that he was promoted to Captain on the 6th of August 1900. Archibald Gordon left Edinburgh in 1906 represented his company during the coronation procession of King Edward VII in London. He left Scotland for London, where he was appointed to be the private secretary of Arthur Wellesley, 4th Duke of Wellington, who also served in the military in the household division. Archibald took up residence at Aspley House in London.

Major Gordon records in the final chapter of his memoirs book, the following:

In his memoirs Major Gordon does not mention the tragic death of King Albert on the 17th of February 1934. But he most certainly had to be informed directly by the Royal Family or the Royal Household. 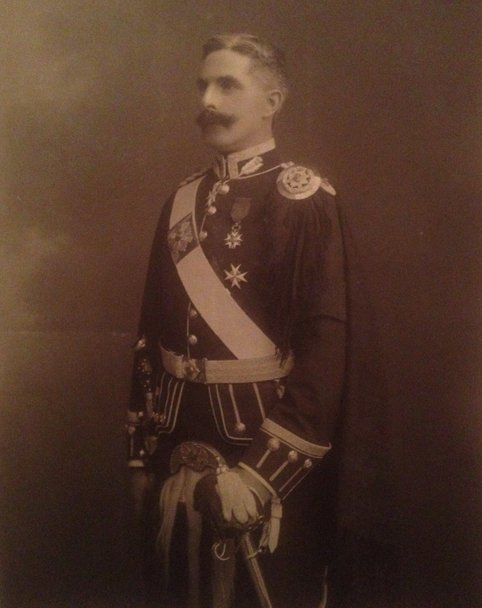 During the First World War, he was promoted to Major and served with the staff members of the 63rd (Royal Naval) Division, during the siege of Antwerp in 1914.  former Colonel Seely appointed major Gordon to his liaison-officer and together they overlooked the positions of the British forces. After the fortress' of Antwerp fell to the enemy, a massive evacuation was ordered by the King of Belgium. Every allied soldier had to be evacuated to the towns of Brugges and Ostend. Major Gordon and Colonel Seely organised the evacuation of the British troops in the frontlines and went to St Nicolas and St Gillis Waes before the forces could board trains in the station of ... After Major Gordon's return to Londen, he received a message from Belgium, with the question, if he liked to become the Kings Messenger to the Belgian King Albert. Gordon accepted with great honour and served King Albert from 1914 till 1922. During his time as kings Messenger he fulfilled many tasks and missions for the Belgian Royal Family in Belgium, France and England, and became a most respected member in the Belgian Royal household.