CAPTAIN A. A. GORDON

The 9th Volunteer Battalion Highalnders Royal Scots was formed in the shadow of the Second Boer war. The establishmet of the battalion was discussed in Edinburgh by Colonel William Gordon, then commanding the first Regimental District, Major Ferguson, an officer connected to the north of Scotland and served for over 20 years in a volunteer battalion and Andrew Gordon, who opened a list for person who professed their readiness to join a kilted corps if a formation will be sanctioned.

The three men discussed the establishment in Edinburgh and Major Ferguson then went to see the commanding officers of the existing infantry corps in Edinburgh and Leith. The 4th and 5th Volunteer Battalion Royal Scots where both enthousisiastic about the initiative and further negotiations where made, and Major Ferguson insisted three essentional points for the Highlanders:

A letter submitting the proposal to raise the battalion was drafted by Major Ferguson and signed and forwarded by Colonel H.R. Macrae, Commanding officer of the Queen’s Brigade. On the 15th of July the establishment was sanctioned and Major Ferguson was gazetted as Lieutenant-Colonel on the 24th of July 1900.

The first battalion Order was issued on the 1st of August 1900 of which the first paragraph was written:

“In assuming command of the Battalion the Commanding Officer relies on the hearty co-operation of all ranks in securing and maintaining for it a high standard of efficiency and conduct.” 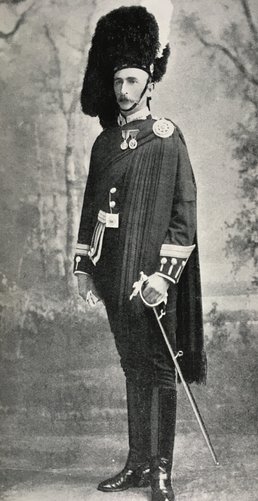 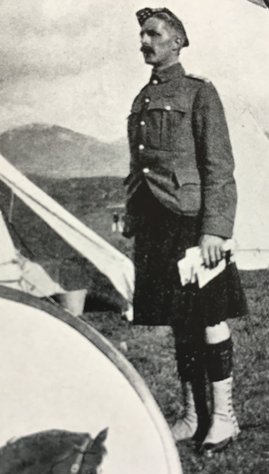 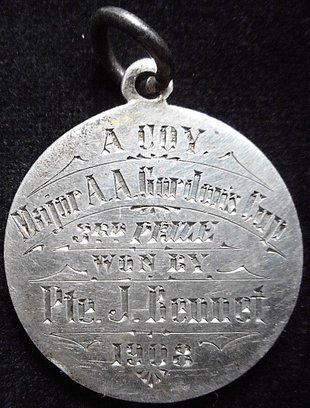 A 9th Battalion trophy medal of the Major A. A. Gordons Cup.

In July 1902 the battalion went into camp for the first time at Tyndrum as part of the 1st Lothian Brigade, under command of Colonel Broadwood. The Brigade consisted of the 4th V.B.R.S, a battalion of the Queen's Rifle Volunteer Brigade and the 9th V.B.R.S. By The end of the week Lieutenant-General Sir Archibald Hunter inspected the battalion. The next day the battalion returned to Edinburgh.

On 9 August 1902, Captain A. A. Gordon stood at the head of a detachment of the battalion in the procession of the Coronation of King Edward VII in London.

On 17th November 1902, Honorary Colonel Sir Ian Hamilton presented the prizes for the past year. It is here that Captain A. A. Gordon received his first and only trophy, being the Clan Fergusson Society Challenge Cup for Collective Firing.

In 1903 the battalion was chosen to form along with the 1st Battalion Royal Highlander (The Black Watch), and the 3rd Battalion The Royal Scots and the 3rd Battalion The King's Own Scottish Borderers (The Lothian and Dumfriesshire Militia regiments) to form the 31st Brigade in the 16th Division and the Sixth (Scottish) Army Corps. The Brigade was chosen to undergo training at the new military training groud at Stobs.   The battalion proceeded to Stobs on 19th July 1903  and was encamped beside the Black Watch.  At the final day of the training camp, the 31st Brigade had to take a stronghold that was defended by the 33rd Brigade under Colonel Forbes-Macbean.  The 31st Brigade was victorious and the General Officer Commanding was much pleased with the results. Later on a Machine Gun Section was formed within the battalion.

The battalion had to gain their strength, but because of the late sanction, many previous men who signed the list, where encouraged or volunteered another battalion. The first course of squad drill could only be performed on the 13th of August 1900, after which the battalion had only three remaining months of the Volunteer year. Colonel Gordon was asked to inspect the battalion and would arrive on the 31st of October. By the 27th of October, the Battalion counted 399 men, this being perfectly sufficient because the first order of uniforms contained only 400 pieces. The sanction of the battalion reads that strength of 800 men was needed, so there was still a lot of recruiting to do. The first inspection officers where gazetted on the 6th of August 1900, beeing Captain A. A. Gordon (Later Major Gordon), Lieutenant Mitchell-Innes and Quartermaster Andrew Gordon. By the end of September an additional 12 officers where gazetted, among which A. A. Gordon’s good friend Captain (later Lt. Colonel) James Clark. In September 1900 Captain Henry Scrymgeour Wedderburn of the Gordon Highlanders joined the Battalion and took up the duties as Adjutant.

The first Battalion Drill was held in Queen’s Park on 22nd September 1900. On 13th October the battalion made a second Drill in the park and on the 20th a parade was held in the Corn Exchange.  Seven days later, Colonel Gordon inspected the Battalion in the Q.R.V.B. Drill hall. Colonel Gordon later expressed his inspection as “Very pleased with the turnout.” He also was very glad to see the Battalion wearing the Hunting Stewart tartan.

The battalion was divided into six companies when the final sixed captain A.S. Blair was appointed. The companies where incorporated as follows:

Soon the battalion founded several challenge cups and other regimental and company prices:

The Commanding Officer’s Cup (presented by Lt. Colonel Ferguson  - For best attendance
The Officers Cup (Presented by Officers – for the best figure of merit in the Annual Musketry Returns)
The Clan Fergusson Society Cup (presented by the Clan Fergusson Society – Awarded for some special form of proficiency in Musketry.
The Rose Cup (A beautiful Cup of Chinese workmanship sent from the Far East by Lieutenant Rose – Shot for in an Inter-Company competition.
Challenge Shield, presented a little later by Major Wardrop, and given originally for excellence in Physical Drill, and subsequently for an Inter-Company Competition, affording a test both of military training and physical condition.

In January 1901 the battalion assisted to line the streets on the occasion of the Proclamation of His Majesty King Edward VII. She was represented in London by Captain Campbell, Lieutenant Gregorson and Lieutenant Huie at the funeral of Her late Majesty Queen Victoria.

The battalion separated from the Queen’s Rifle Volunteer Brigade in July 1901 when the War Office wrote the following letter:

Sir-With reference to War Office Letter No. V/I/I/330, dated 28th June last, I am directed by the Commander-in-Chief to inform you that His Majesty has now been graciously pleased to approve of the Highland Battalion, now forming part of the Queen’s Rifle Volunteer Brigade, The Royal Scots (Lothian Regiment), being separated from that Crops and being formed into a separate unit, to be designated the 9th Volunteer Battalion (Highlanders) The Royal Scots (Lothian Regiment). A nominal list of the officers proposed to be transferred to the new Battalion should be forwarded as soon as possible.

The Battalion in Column in June 1902 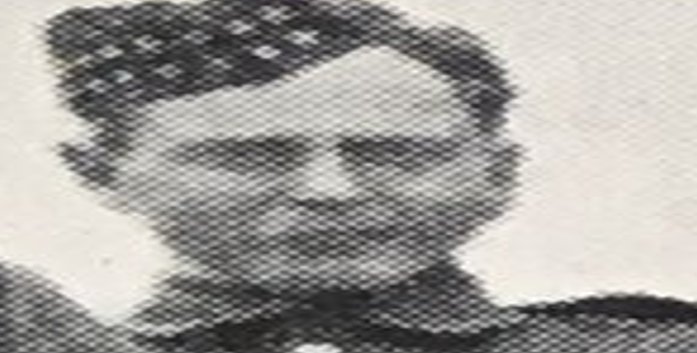 THE OFFICERS AT STOBS WITH CAPTAIN A. A. GORDON SIXT FROM RIGHT (STANDING)

CAPTAIN A. A. GORDON'S  LETTER OF GRATITUDE TO COLONEL FERGUSON'S RESIGNMENT

“Colonel James Ferguson, in intimating his relinquishment of the command of the Battalion, desires all ranks to know that he parts from them with great regret, and owing to private reasons in no way connected with any Volunteer considerations, which have made it his clear duty most reluctantly to tender his resignation. He thanks all ranks for their co-operation and support in the formation of the Regiment, and has greatly appreciated the spirit and energy which enabled it in so short a time to take a high place among the Volunteer corps of Scotland. He congratulates the Battalion on its success and the satisfactory and solid position attained in four years and four months. The regiment has been raised, organised, clothed in full Highland uniform, equipped, and provided with the necessary service dress. Over 1000 men have been enrolled, and in spite of unavoidable losses caused by changes of civil employment, and by the uncertainty for the last three years as to the conditions of Volunteer service, the strength at 31st October was over 600. The regiment has been provided with a Range of its own, and with Headquarters in buildings which are now the property of the Corps, and in the future will be fully available for increased accommodation. Colonel Ferguson has the satisfaction of handing over to his successor in the knowledge that the regimental resources are equal to the obligations, and that the Corps stands in a sound financial position. While he regrets that unforeseen circumstances have prevented him working out the second four years of command recently granted, he will always look back with pride and pleasure on the four years during which he had the honour to command the Highlanders, which have left him many pleasant memories and no recollection of any unpleasantness within the Battalion. No Volunteer Commanding Officer could have received more hearty and loyal support from his officers and felt more reason for confidence in his comrades of all ranks. Colonel Ferguson feels sure that the same support will not be wanting to his successor, and that the Royal Scots Highlanders will always maintain the traditions and character for discipline, steady work, and the best form of esprit de corps associated with the Highlanders of all branches of the King’s service."

By order,
A. A. GORDON
Captain and Acting Adjutant,
9th V. B. (Highlanders) R.S. 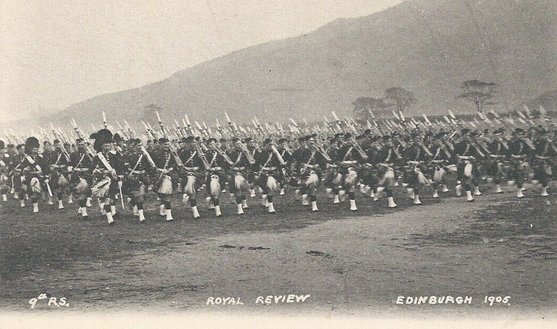 DESCRIPTION OF MAJOR A. A. GORDON IN J. FERGUSON'S BOOK:

The year 1904 was a though year for the battalion because they failed to obtain the higher allowances at Stobs, because the battalion had not enough men to participate in the training. Another fact was that many original members had completed four youers of Volunteer Service and know where resigning to fulfill job oblications.

In May 1903 Captain A. A. Gordon was attached to the Black Watch at the Castle for a month's training. Here it was intimidated that the 9th Royal Scots and the 6th Volunteer Battalion would be attached to the 1st Black Watch at stobs. By the end of the year Colonel Ferguson reluctantly foud himself obliged for reasons of a private and personal character to give up the command of the regiment. Captain A. A. Gordon wrote the letter of Gratitude to Colonel Ferguson, which was published in the London Gazette on 5th December 1904. 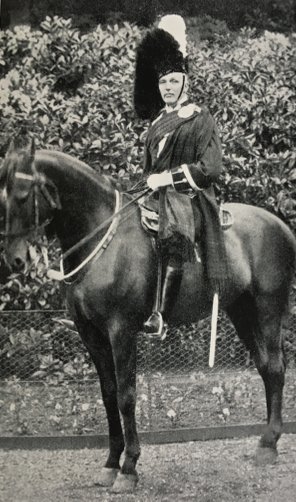 Commander Ferguson was succeeded by Lt. Colonel James Clark on 17th December 1904. on 7th January 1905, Captain A. A. Gordon as promoted to the rank of Major and attended a supply class in February and later on a course of military equitation at Aldershot.  The next month, Lieutenant Mitchell-Innes, who was one of the two officers who got appointed on the same day as A. A. Gordon resigned his commission. In May 1905 Major A. A. Gordon was appointed Brigade-Major, 1st Lothian Volunteer Infantry Brigade. The same year Major Gordon obtained a Certificate of Proficiency in Transport at Aldershot.  Major Gordon would participate at the training camp for the last time from 23rd to 30th July. In September the battalion took part in the Royal Review of the Scottish Volunteers in Hollyrood Park. The battalion made a very good impression on the review and the parade.

In May 1906, Major Gordon resigned his commission in the battalion and left Edinburgh for good to take up an appointment for the Duke of Wellington, Arthur Wellesley. He was succeeded by Captain Brown as commanding officer of A Company.