PART OF THE HOUSEHOLD OF KING ALBERT I 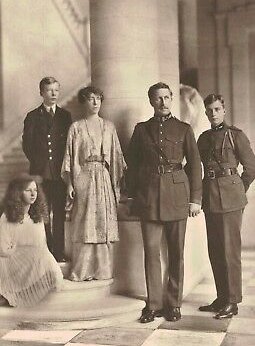 Major Gordon was a good friend and well known confidence person amount the Belgian Royal family and had many private times with them. He served the princes and princes many times and wrote many anecdotes about them in his book Culled from a Diary. Even after he resigned as Kings Messenger he kept corresponding with them.

Major Gordon recounts a time in his book with Princess Marie-José in Hardelot. While waiting for directions from King Albert, Princess Marie-José asked him to come and see a rabbit, which she was given by a captain. The rabbit was named after a the ship, "Marshal Soult", on which the Princes had given the rabbit. The next day the rabbit had given birth to six child rabbits. "Marshal Soult" was later in the garden of Hardelot, and because Major Gordon was concerned it will escape, he called "Soult" many times, but naturally with no response of the rabbit. Afterwards Princes Marie-Josée came to the scene and said "Major Gordon, no wonder my rabbit will not obey you, her name is Marshal Soult and not Soult. It is just as if I were to speak with you as 'Gordon' and no one would know who I meant, but if I spoke of Major Gordon I would be understood at once because everyone knows who Major Gordon is." After these words from the princes, Major Gordon stood reprimanded.

Princes Marie-Josée was a animal lover and had large collection of woolly animals. Her prime favourite was a dog called Fifi. Fifi was fallen into the sea, on the Princes visit to the ship Marshal Soult. Fifi was later given to Major Gordon, after she was given her rabbit, who took it to his home and had it on a special place under a glass case there. When later the engagement was announced of the Crown Prince of Italy and Princes Marie-Josée, Major Gordon wanted to give the couple a special wedding gift. He sent Fifi to Pullar's and was returned as a new dog. He then bought a Scot's bonnet brouch, set with a bright purple Cairngorm, and attached it to pale blue rib band, which he put around Fifi's neck. He then had it packed and gave it to Baron Moncheur, The Belgian Minister in London to deliver it to the Royal Family in Laeken. Major Gordon was given an touching acknowledgement afterwards.

On 17 October 1918, when Major Gordon was at home, he received a telephone message of King Albert from Ostend. The city had not been abendend long ago by the Germans, and King Albert and the Queen had been taken their by Admiral Keyes in a torpedo boat. The message to Major Gordon was to get Crown Prince Leopold at once to Belgium. Prince Leopold was studying in Eton College during this time and Major Gordon picked him up, and both stayed in Gordon's house until next morning, when headed for Dover. Here they boarded the destroyer "Murray" under the command by Lieutenant-Commander F.H.G. Dalrymple Hamilton. Later on Major Gordon went briefly back to London to get Prince Charles for the approaching return of King Albert in Brussel.