AKA THE EARL OF ATHLONE 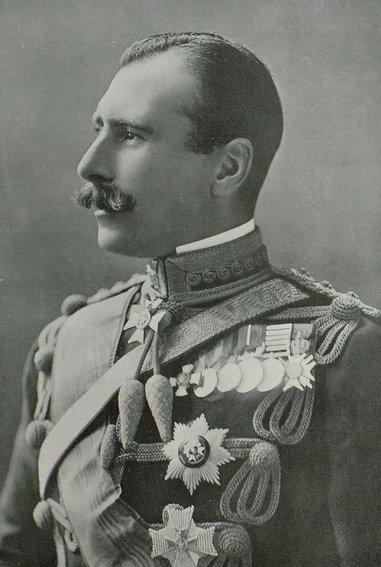 The first time Major Gordon mentioned the Earl of Athlone in his book 'Culled from a diary' is when he received a message from Belgian Royal Household that King Albert I, the Queen, and some officials where planning to come to England for the Silver Wedding ceremony of King George V and Queen Mary. Major Gordon rushed himself to Buckingham Palace to inform the royal family of the arrival of King Albert I. There he was received by Lord Athlone and was later joined by Princess Alice and Lord Stamfordham.

During the visit of King Albert I to Scotland, a visit planned during his presence in Britain for the Silver Wedding ceremony, Lord Athlone was mentioned as one of the accompanied of King Albert, by Major Gordon.

Major Gordon mentions the name Prince Alexander of Teck instead of Lord Athlone in his book Culled from a diary, with the establishment of the Saint Ninian's Church at La Panne in 1917. Major Gordon states the following:

Prince Alexander of Teck was born in Kensington Palace on the 14th April 1874. Being the fourth child of Prince Francis, Duke of Teck, and Princess Mary Adelaide, Duchess of Teck. His mother was the first cousin of Queen Victoria and a grandchild of George III. Prince Alexander was known to his family and friends as Alge, derived from the first two letters of Alexander and George; and was characterised as a meticulous individual with a quick, but short-lived, temper and an ability to be cautious and tactful.

When Prince Alexander was nine years of age, his parents fled to Europe, because of there huge debts. However, Prince Alexander, remained at Eton College and was later moved to the Royal Military College of Sandhurst. After his graduation, he was housed in the 7th Queen's Own Hussars as a second lieutenant. In 1896 he served with the regiment in the Second Matabele War in Africa. After his return, he was granted with the Knight Commander in the Victorian Order and was promoted to lieutenant and captain afterwards.

At the outbreak of the Second Boer War, Prince Alexander was sent to South Africa. Here he was distinguished with the Distinguished Service Order.

On the 16th of November 1903, the announcement came that Prince Alexander was engaged with his cousin once removed, Princess Alice of Albany. The couple was wed on the 10th of February 1904 and received three children, but there second and last son will die some 6 months after his birth.

In January 1911, Prince Alexander was promoted to Major and was a brevet lieutenant-Colonel commanding the 2nd Life Guards. Because he was called up for service at the outbreak of World War One, he had to decline the position of Governor-General of Canada. Shortly he was shipped to France and Flanders for encountering the enemy. Here he was promoted to Lieutenant Colonel, with the temporary rank of brigadier General in December 1915. He was later awarded by King George V, for his service, with the Companion of the Order of St. Michael and St. George in 1917.

Because of the anti-German sentiment in the British Empire during the war, the King had to change the name of the royal house of Saxe-Coburg and Gotha to a more English House. He therefore renounced all the Germanic titles for himself and all members of the Royal Family. A Royal warrant issued on 14 July 1917 stated that Alexander and his brother Adolphus are also relinquished all of there German titles, styles and honours and that they choose instead the name Cambridge, after there father. Alexander was then known simply as Sir Alexander Cambridge, he barely had to keep the honour Sir, because he was decorated with his knighthoods. On 7 November 1917, King George V created him Earl of Athlone and Viscount Trematon. Alexander declined the marquessate because he finds the title not British enough. His wife retained her royal style and title, while there surviving children where made Lady May Cambridge and Rupert Cambridge. Because Rupert died on the 15th of April 1928, just before his twenty-first birthday, the title, Earl of Athlone extinct with the death of Alexander.