BELGIAN CARDINAL IN THE CITY OF MALINES 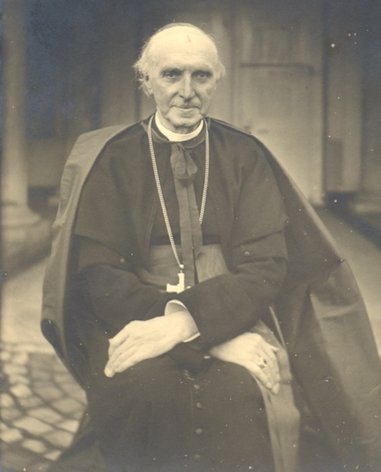 Major Gordon met with Cardinal Mercier early in the war, during the siege of Antwerp. Together with Monsieur de Bassompierre they were invited by the Cardinal in Malines. Cardinal Mercier showed their guest's his internally ruined cathedral and palace. Mercier's bedroom was hit badly by shrapnel and is his place of repose he had a large straw bag on the floor. Major Gordon later received letters from Cardinal Mercier during the war, which were sent to Apsley House. During the election of His Holiness Benedict XV in September 1914, Cardinal Mercier was given the right by the Germans to travel to Rome. Afterwards the cardinal wasn't allow to travel the same route he came through. This resulted that a British war vessel was sent to a port of Italy and His Eminence thus sailed to England and got later back to Belgium.

After the war Major Gordon had to accompany Admiral Beatty to a reception with Cardinal Mercier in Malines. Admiral Beatty wasn't very fond of the meeting with Cardinal Mercier, because he didn't know what he had the do with the Church in his (army)position. Major Gordon convinced the admiral to go to the reception and they went for the Archbishop's palace. On their arrival they were ascended into the Audience Room, where Cardinal Mercier welcomed the Admiral with the words: " Admiral Beatty, I am so pleased to welcome you the savior of the world, for we can never be grateful enough for what Britain's Navy did."

After greeting the rest of Admiral Beatty's suite, Major Gordon and Admiral Beatty where invited to the study of His Eminence. Here they were presented with signed photographs of himself. It was Major Gordon's third signed autograph he received from the cardinal. Major Gordon was then sent downstairs to get two Cathedral stained-glass lights that he could get home, once home Major Gordon had one framed and given it a honorable place. One of the lights had a crack, because the German had trained their guns on the vast west tower of the Cathedral of St. Rombaut. The visit to Cardinal Mercier was ended by six o'clock and Major Gordon drove Admiral Beatty back to Brussel where he was invited to a banquet in his honor by Queen Elisabeth.

Cardinal Mercier was born as Désiré Félicien François Joseph Mercier on 21 November 1851. He studied at the

Mechelse Sint-Romboutscollege where he learned the Flemish language. After being a teacher himself, he became a priest on 4 April 1874 and became later a Tudor for religious education in Leuven, on the request of Pope Leo XIII. The success of his education assured him the support from the Pope in establishing a Religion Institute on the Catholic University of Leuven. Mercier became the chairman of this institute in 1889.

In 1906, Mercier was appointed to Archbishop and a year later he was elected as Cardinal. Prior to the war he was involved in Belgian politics and defended the interests of the Catholics in Belgium, with the French aristocratic Catholic Party. He used this to defend the upcoming of the antireligious Marxism in the east of Europe.

During the war, Cardinal Mercier encouraged the Belgian population to resist the German Occupation. This made him an admired figure in Belgian as well as Britain. During New Year's eve every chancellery rode the Christmas message Paix et endurance to the audiences. De message said that the civilian nor any regards, nor any obedience had against their suppressor. This resulted in almost an arrest warrant from Moritz von Bissing. It didn't bothered Cardinal Mercier, to condemn the deportations of Belgian workers in 1916.

After the war, Cardinal Mercier concerned himself with the national unity of Belgium and was a great opponent against the Flemish movement, who wanted to create a Flemish education system in Flanders. From 1920 onwards, he tried to serve problems within the Catholic church and tried to unify the Anglican and Roman Catholic church, whithout any success.