Queen Elisabeth had asked the great Belgian violinist Eugène Ysaÿe in 1916 to visit La Panne with his Quartette, and Major Gordon was tasked to escort the party from London to La Panne.

Major Gordon had already met the violin master on previous occasions so he was no stranger to him. The company boarded the train in Victoria Station on the 16th of June 1916 and arrived the same day at La Panne. Ysaÿe played for King Albert and Queen Elisabeth that evening. During Mr Eugène Ysaÿe’s stay in La Panne he played many times in the hospital for the wounded soldiers.

In the book: Eugène Ysaÿe et la musique de Chambre by Michel Stockhem, Major A. A. Gordon is mentioned in the chapter 'Au Front' on page 146. The paragraph is written from Lionel Tertis' journal:

16 June 1916, First day, I leave my home at Belmont in Surrey at 6. 15 a.m. I travel to Victoria station and find there at the platform the Belgian poet Rousseau, Mr Ysaÿe together with Major Gordon (liaison of King Albert of Belgium), Emile Doehaerd and Theo (Ysaÿe' brother).

We all arrived at Folkestone at 10.45 a.m. and embarked with some other soldiers. The first thing we noticed was a submerged submarine. The ship sailed for France at 11.30 a.m. and we all had to wear a lifevest. After a time merchant navy ships followed us and were visible so far as the eye could see to Dover. We were escorted by a Torpedo boat. At our arrival at the port of Boulogne, we saw an ammunition vessel that was torpedoed eight months earlier by a German Submarine. We embarked and Major Gordon looked well after the administration for getting us by the checkpoints. A vehicle of the Royal household was waiting for us, and we proceeded with five men inside and two others outside, a pretty nice load. It wasn't for long, that we where stopped at the next checkpoint, and in total we will pass twelve checkpoints before arriving at La Panne, and we passed every one with great efficiency because Major Gordon was watching over it. There where countless British soldiers in the camps we pass, and we where doing 55 km/h at poor sandy roads! We stopped near Calais to see Ysaye's youngest son, who was dressed in Khaki. He was given a bill of 100 francs from his father. We arrived at La Panne at 16.45 p.m."

The next morning Major Gordon told us to pack for playing at a Hospital. The scene (at the hospital) was looking like a city of death, with the inexhaustive sounds of the canon's at Ypres. Just before we wanted to set down for lunch, a terrible explosion occurred and Ysäye exclaimed "Voila, du sonnette du repas !" witch translates "Voila, the bell for the meal".

Eugène Ysaÿe was born on the 16th of 1858 at Liège, as the son of the conductor Nicolas-Joseph Ysaÿe. At the age of seven, he was accepted in the Conservatoire royal de Liège, but was expelled a year later, because his father had a disagreement with his son tudor. Eugene also lost his mother that same year. The famouse violinist Henri Vieuxtemps, took him under his wing, and got him back into the Conservatorium. Via Vieuxtemps he got a collegefund for twelve lessons with Henryk Wieniawski - Ysaÿe' idol' in Poland. Later he played as second violist in the Casino of Osten and in 1875 he went to Paris where he met up with the great musicians: Franz Liszt and Anton Rubinstein. 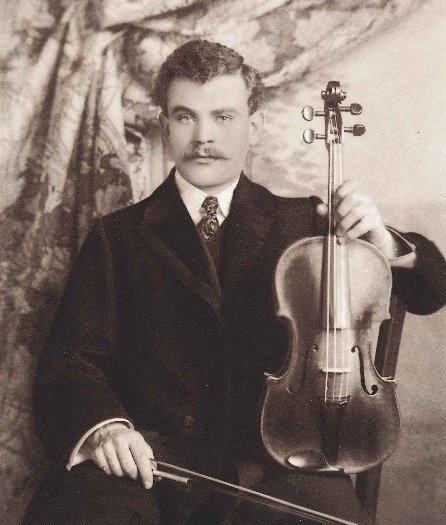