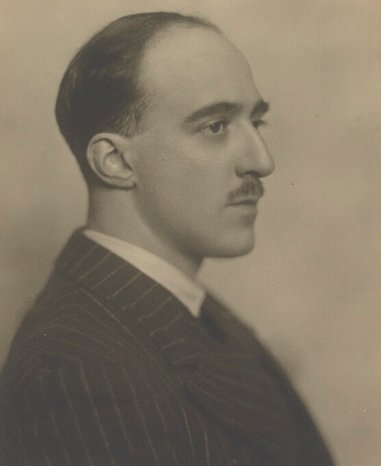 Its is believed that Major Gordon met with H. V. Morton during his first voyages to the Holy Land in the early 30's. Both men endorsed a friendship in later years and had contact with each other at least until 1942.

On 28 May 1936 H. V. Morton road a letter to Major Gordon from 35, Grosvenor Place S.W.I in which he mentioned the project of Major Gordon at Tabgha (Mosaics of the Church of the Multiplying) and also mentioned that he was working hard on his next book "St. Paul".

On 15 October 1936 H.V. Morton wrote a second letter to Major Gordon from the same address in which he expressed his gratitude that the funding for Tabgha is complete and that he is looking forward to the translation of Dr Sneider's book. He finished the letter that St. Paul is finished and will be published on the 30th of the month. Furthermore, he states that he wishes to see him on the next cruises of the following year.

In 1942 H.V. Morton wrote an honourable letter to Major Gordon to congratulate him on the publishing of his book 'Culled from a Diary'. He remarked that the book was not long enough and he wished that it contained a picture of Major Gordon. He also writes that he was delighted to read the story of Windsor Castle estate again, as Major Gordon had sold it to him on board the S.S. Letitia some year previous.

Lastly he explained that Sir Henry Lunn, the man who invited Major Gordon into the Helvennic travel society and who was now deceased would have enjoyed this book. Morton signed the letter with his name and reference "Author of In the Steps of the Master" - 4 may 1942

Henry Canova Vollam Morton became famous in 1923 when he scooped the official Times correspondent during the coverage of the opening of the Tomb of Tutankhamun in Egypt. He became a journalist in 1910 at the Birmingham Gazette and Express, where his father was an editor. He served abroad in the First World War with the Warwickshire Yeomanry and returned afterwards to London to resume his journalism career.

In 1923 while working for the Daily Express he was chosen as the correspondent from the Times to report on the excavations of the Tomb of Tutankhamun by Howard Carter and made fame when publishing the following scoop:

The romantic secret of the tomb of Pharaoh Tutankhamen in the Valley of the Kings at Luxor was revealed yesterday when, for the first time in 3,000 years, the inner chamber of the tomb was entered. Every expectation was surpassed. Within the chamber stood an immense sarcophagus of glittering gold, which is almost certain to contain the mummy of the king. Wonderful paintings, including that of a giant cat, covered the walls. A second chamber was crowded with priceless treasures.

In 1925 Morton wrote his first book The Heart of London and published two years later In Search of England which became a best seller. In 1934 he published his book In the Steps of the Master which recounts his travel story's to the Holy Land. The book became a bigger bestseller as the last with over half a million copies sold. Twee years later he made prequel to the book and named it In the Steps of St. Paul. in which he describes Turkey, 13 years after the Turkish War of Independence and its founding as a sovereign state. H. V. Morton published several books afterwards and was a Fellow of the Royal Society of Literature.

During the late 1940's Henry V. Morton and his second wife, Violet Mary Muskett resided in South-Africa and he later became a South African citizen. He died at the age of 86 on June 18, 1979 in Somerset West, South Africa