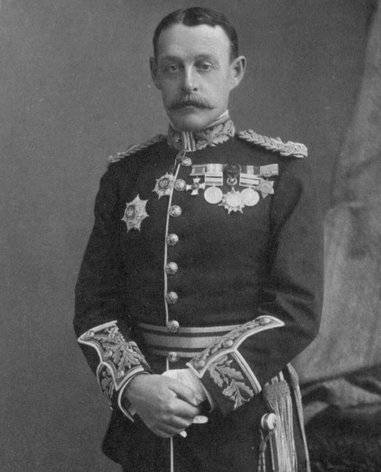 Major Gordon worked together in the funding of the Scottish National Memorial for Queen Victoria. The memorial was the establishment of a school, for the sons of military personal, who served in an army of the British Empire. It was also conducted for the many Scottish orphans of the Second Boer War. After the establishment of the Queen Victoria School in 1908, the memorial status became faded. After this was mentioned to Major Gordon, he wrote to Archibald Hunter, so that an unimpeachable record in writing could be written. Archibald Hunter wrote a letter of the establishment of the school in June 1930, who published it in his book 'Culled From a Diary' on pages 24-25-26

Archibald Hunter, born a twin, on 6 September 1856, was the son of Archibald Hunter and Mary Jane Graham.  Hunter began military education in Glasgow and later went to the Royal Military College Sandhurst. At the age of 19 he was incorporated as a sub lieutenant in the 4th Lancashire regiment. Hunter joined the Gordon Relief Force, which had the task to rescue Major-General Charles George Gordon in Khartoum, but arrived two days after the General was killed. Hunter stayed in Sudan, and had great involvement in fighting the Mahdi. He got wounded at the head of his brigade Suakin. Afterwards Hunter was appointed Governor of Dongola Province in the Sudan and Commandant of the Frontier Field Force in 1895. A year later he joined the Anglo-Egyptian Nile Expeditionary Force. In 1898 he took part in the Battle of Omdurman and was a year later transferred to India.

After the war Hunter became General Officer Commanding Scottish District in May 1901. In 1907 he was appointed to General Officer Commanding Southern Army in India. From 1910 till 1913 he became Governor of Gibraltar. He got married in 1910 with Mary, Dowager Baroness Inverclyde, but remained childless. Because of his senior age, he had no active service in de First World War and was sent to Aldershot, where he retired in 1918.

FOUNDER OF THE QUEEN VICTORIA SCHOOL AT DUNBLANE