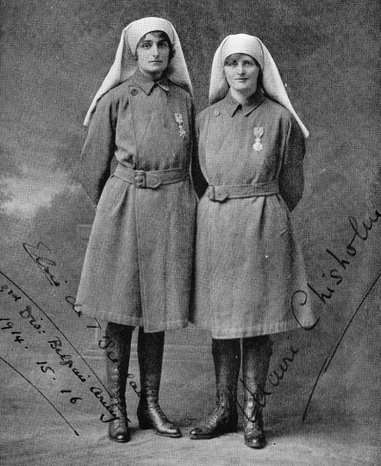 During his stay in La Panne, Major Gordon encountered two British women who became known as the Madonna's of Pervyse. These persons were Mrs Elsie Knocker and Miss Mairi Chisholm. Elsie was a former trained nurse and both had joined an ambulance group called "Munro's Flying Ambulance" in September 1914. Because of the reorganisation of the Belgian Army the ambulance group was cancelled but the two ladies got permission from the Allied Command, to set up a 'Poste-de-Secours' at a very short distance from the front, near Pervyse. During the war, their post was shelled and they took up residence in the ruined village.

Major Gordon visited them almost every Saturday in his spare time and brought them tinned foods. To see the heroism of these two women had a great effect on him, that he felt some sort of cowardice when he had to leave them. Major Gordon saw them last in a nursing home in London when they were recovering from a gas attack in 1918.

King Albert I decorated the ladies with a knight in the order of Leopold II. Both ladies where also recipients of the military medal in 1917, for recovering and aiding crashed British pilots.

Elsie Knocker was born on 29 Juni 1884 as Elizabeth Blackall Shapter in Exeter, Devon. She was the youngest child of Dr. Thomas Lewis and Charlotte Shapter, who received five children in total. After the tragic death of her parents, she became orphaned and was subsequently adopted by Lewis Edward Upcott, a teacher at Marlborough College, and his wife Emily who sent her to be educated at St. Nicholas's, Folkestone, and then at the exclusive Château Lutry in Switzerland. After training at  Children's Hip Hospital at Sevenoaks, she married Leslie Duke Knocker in 1906, and received her son at Kenneth Duke, a year later. Soon afterwards she got divorced and began training at Queen Charlotte's Hospital. In the Edwardian Era, a divorced wife was a bit of a shame. Because of this, she invented the myth that her husband had died in Java, and had become a widow. Being a single mother, Knocker was enabled to follow any passions for a while, but became an amateur motorbike enthusiast and established the Gypsy Motorcycle Club. She possessed a Scott, a Douglas solo, and a Chater-Lea with a sidecar which would travel with her to the Western Front.

On the outbreak of the war, she road to her good friend and member of the Gypsy Motorcycle Club, Mairi Chisholm a letter where she did the proposal to join together the Women's Emergency Corps as dispatch riders.

Chisholm was chosen to join Hector Munro’s Flying Ambulance Corps, and convinced him to take Knocker as well. Together they embarked at Ostend and got to Nazareth, where the headquarters of the ambulance first was located. By the end of October, the corps moved to Furnes, near Dunkirk. Knocker and Chisholm soon came to the conclusion that they could save more lives by treating the wounded directly on the front lines. This resulted in resigning the corps and they both set up a field hospital at Pervuyse, north of Ypres. The field hospital was known as "Poste de Secours Anglais" ("British First Aid Post") and the couple would spend the next three and a half years aiding the wounded in this Belgian sector. The even managed to save and rescue a wounded German Pilot in No Man's Land and were awarded both with the British Military Medal for this act.

During the German offensive in March 1918, both women were gassed and hospitalized in England. The remaining of the war they served with the newly formed Women's Royal Air Force.

In 1919, the Roman Catholic Church found out the truth about her previous divorce. Chisholm ended their friendship because of this deception.

At the outbreak of World War II, Knocker joined the Women's Auxiliary Air Force (WAAF) as an Aircraftwoman 2nd class, and became an officer in February 1940 and rose to the rank of Squadron Officer in March 1942. On 3 July 1942 her son, Wing Commander Kenneth Duke Knocker was killed when shot down over Groningen, Holland. Because of this, Knocker left the RAF in October 1942 and had to look after her elderly foster-father.

Marie Chisholm was born on 26 Februari 1896 in Scotland, beeing the daughter of Captain Roderick Gooden-Chisholm and Margaret Fraser. Chisholm came from an independently wealthy Scottish family, who owned a plantation in Trinidad. The family moved from Scotland to Dorset, where she witnessed her older brother competing at motorcycle rallies and speed trials. Because of her interrest in motorcycles, her father bought her, against the wishes of his wife, a Douglas motorbike. At the age of 18 she met Elsie Knocker, while roaring round the Hampshire and Dorset lanes. Elsie Knocker was than thrity years of age and a single mother.They became fast friends and soon began competing in motorcycle and sidecar trials together.

In 1916, Chisholm became engaged to a Royal Naval Air pilot named Jack Petrie, who died a year later during flying practice. Chisholm became engaged for the second time in August 1918 to Royal Air Force Second Lieutenant William Thomas James Hall whom she had met while training in the WRAF, but the engagement was subsequently called off. Chisholm will remain the rest of her life single.

In 1919 her friendship with Knocker was lost, when Chisholm found out about the truth of Elsie Knocker's previous marriage. 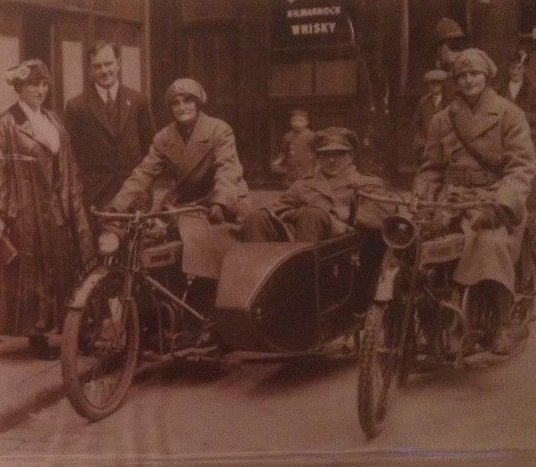