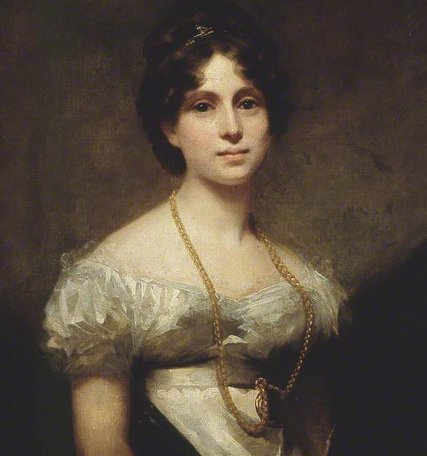 A. A. Gordon's mother was a good friend of Lady Abercromby, who with her husband were the chief residents of Bridge of Allan. Lord and Lady Abercromby lived in the beautiful Airthrey Castle. When Lady Abercromby was off duty, she came to Airthrey Castle and brought always little vegetables filled with a harmless liquid from London to the Gordon's children's taste. Lady Abercromby had a great impression on the children because she invariably took her daily airings in a low 'Victoria' carriage drawn by four horses, ridden by outriders. It always filled the Gordon with delight when her carriage came up there driveway and stopped before the hall door. Lady Abercromby informed the family over the illness an convalescence of the Prince of Wales (later King Edward VII).

Being the child of Adam Haldane-Duncan, Viscount Duncan, Earl of Camperdown, and her mother Juliana Cavendish Philips, daughter of Sir George Richard Philips, Bt. She married George, 4th Baron Abercromby in 1858. From April 1874 until March 1885 she was a Lady-of-the-bed chamber to Queen Victoria and was decorated with the Royal Order of Victoria, Third Class. She later painted the first official portrait for the Queen for the National Portrait Gallery, that was approved in 1883. Queen Victoria's preference for the painting was because it did not emphasize the Queen's regalia but the woman behind the power.