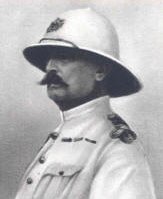 Colonel Tilkens and Major A. A. Gordon where both present at Buckingham Palace during the Silver Jubilee of King Georges V in 1918. They both were doing some paperwork in the office when Prince Charles was also present in the room. He was sitting on a large table near the window of the room, making some drawings and writings. Once he draws a sketch of Major Gordon and gave it to him as a present. In later years Gordon mentions this drawing in his book 'Culled from a diary' and states that he still has it.

When Major Gordon went to check up on him, he saw that the Prince had used a large wax scroll to impress the Royal seal on some papers. The only problem was, that he hadn't used protection underneath it, so the wax had been pressed into the green leather top of the table. Colonel Tilkens than came to the scene, and spoke in anger to the Prince, and concluded that his father, King Albert I had to be informed. At this point, Major Gordon was lost wat to do, and could only conclude that the tabletop was ruined.

Prince Charles and Colonel Tilkens informed King Albert of the situation when Major Gordon went to see the curator of Buckingham Palace. After explaining to him what had happened, the curator friendly stated: "Boys must be Boys".

August Tilkins was born on the 1st of October 1869 in Ostend.

He joined the Belgian Military and became a Second-Lieutenant in the Belgian Artillery unit on the 1st of December 1889. He became later a Staff member and an Aide de Camps to the Generals Guillaume, Timmermans and Mascart. At the outbreak of the war, Tilkins fought with the 10th, 11th and 12th artillery batteries, and fought for seven days and seven nights near Schoorbakke in October 1914. He later distinguished himself at Nieuwpoort in November 1914.

In 1915 he was transferred to Congo together with General Tombeur. Tilkins was one of the main officers who contributed to the victory during the battle of Tabora.

He was appointed to Major-General on the 26th of June 1922 and remained his position as Aide de Camps of King Albert I. On the 26th of December 1922, he was promoted to Lieutenant-General.