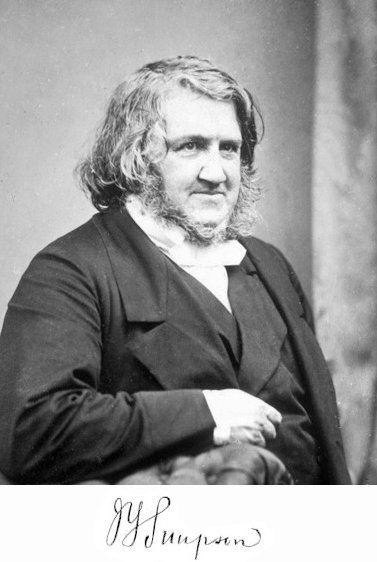 Major Gordon met Dr. Sir James Young Simpson in his childhood. The doctor was a friend of his father, who was also a doctor.  Sir James Young Simpson lived for a breath time with the Gordon family and kind to Gordon and his brothers and sisters. He gave the children some hard physical exercises, that they couldn't fathom at a young age, but the children had great amusement with them.

Sir James Young Simpson was a Scottish physician and a significant figure in the history of medicine. He was the first physician who used anaesthesia on human patients. Simpson showed a wide range of interest's from

archaeology to the then taboo subject hermaphroditism.

David Simpson and Mary Jervais. Simpson showed a huge learning skill and entered the University of Edinburgh at the age of only 14. Here he studied for an arts degree and started two years later on his medical studies. During his studies, he attended many other classes, one by the famous surgeon Robert Liston and by a professor of Pathology, John Tompson' assistant. After graduating, the general practitioner and succeeded James Hamilton, Professor of medicine and midwifery on the age of 28.

In 1847, Simpson first demonstrated the properties of chloroform upon humans. Dr Simpson and two of his assistants, Dr George Skene Keith (1819-1910) and James Matthews Duncan (1826-1890), used to sit every evening in Dr Simpson's dining room to try new chemicals to see if they had any anaesthetic effect. All found out later that a chemical called Chloroform was used in 1842, to anaesthetize large animals, so conducted there experiment on themselves. On inhaling the chemical they found that a general mood of cheer and humour had set in. But suddenly all of them collapsed only to regain consciousness the next morning.

It was much by chance that Simpson survived the chloroform dosage he administered to himself. If he had inhaled too much and died, chloroform would have been seen as a dangerous substance, which in fact it is.

Simpson was elected President of the Royal College of Physicians of Edinburgh in 1850. He died on 6th May 1870 at the age of 53.