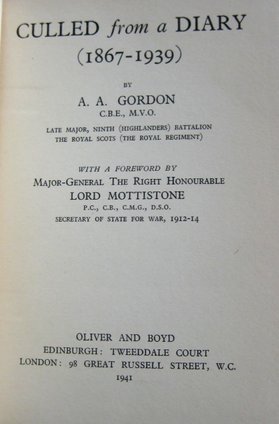 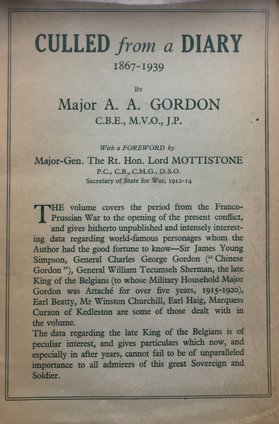 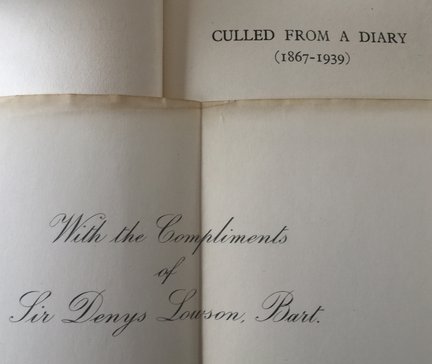 The book Culled from a Diary was written by A. A. Gordon on the request of his many friends. Gordon thanks in his preface the famous Scottish novelist Anna Mesterton Buchan, who published under the alias O. Douglas, for her support. The second person Gordon thanks in his preface is his old friend and supreme commander during the Battle of Antwerp, Lord Mottistone. Lord Mottistone also wrote the foreword for the book in October 1939. The last person Gordon thanks is Dom Ernest Graf from St. Marys Church in Devon, for his (spiritual)advice and support for writing this book.

Gordon let his readers know, that the book was written on the basis of his personal diaries, other than from memory. The book contains 17 chapters with the appendix of Gordon's rapport to Winston Churchill over the Battle of Antwerp. In total 214 pages here written and published. On the paper jacket of the book mentions Gordon many world-famous people he had the pleasure to meet and serve with.

The book was published in 1941 with Oliver and Boyd, Edinburgh. The original price for the book was 8 pounds, 6 shilling.

How many editions where published is still unknown to us.

Our organization is always looking for editions from 'Culled from a Diary' and found an edition that was given by Sir Denys Lowson, former Lord Mayor of London in 1950-51. Sir Denys Lowson was born as the second son of James Cry Flowerdrew Lowson, a Scottish papermaker and Adelaide Louisa Scott. Adelaide was the daughter of Col. Courtenay Harvey Saltren Scott who commanded the Bengal Staff Corps. Lowson's older brother was killed in the First World War and his sister married with Maj. Gen. William Revell Revell Smith. Denys was educated as a lawyer and became an important financer in Unit-trust's.  He became Sheriff of the City of London in 1939, was Alderman of London from 1942 till 1973 and became Lord Mayor of London in 1950. He also was Governor of the Royal Shakespeare Theatre in Stratford-Upon-Avon.

It was pointed out to us by Mr. Gilhooley that James Cry Flowerdrew Lowson, Sir Denys (father) was an officer in the 9th Royal Scots. He was appointed

Captain on 18 Feb 1905 and served with the battalion during the First World War in France.

MAJOR GORDON'S EDITED BOOK: THE CHURCH OF THE MULTIPLYING OF THE LOAVES AND FISHES

The Church of the multiplying of the loaves and fishes is a book edited by A.A. Gordon on behalf of Alfons M. Schneider. The book was printed in 1937 by Alexander Ouseley, LTD. London.

Gordon mentions this book in his final chapter of Culled from a Diary, which was published four years later. The following statement was given of the book:

"If readers care to consult a history of the actual finds and see most beautiful publication entitled "Church of the Multiplying of the Loaves and Fishes at Tabgha, Lake of Galilee, and its Mosaics" by Alfons M. Scheider, edited by A. A. Gordon (1937). The edition I ordered was a small one and is sold out, but a copy can be seen in the Library of the British Museum and the other National Libraries.

"As I am responsible for the publishing in English of Dr. A. M. Schneider's book, he was kindly allowed me to insert the following as a Foreword.

I wish to thank Professor Dr. H. Finke of Freiburg and Dr. A. M. Schneider for allowing the latter's book (brought up-to-date) to appear in English and to use all the original blocks of the mosaics. I am very grateful to my friends Dom Ernest Graf, O.S.B. of St Mary's Abbey, Buckfast, Devon, for translating the German text To Mr. J. A. Meyer, of Bridge of Allan, for expert help regarding technical terms, and to the Reverend J. Todd, M.A., late professor Semitic Languages, Toronto University, for correcting, and arranging, the proof sheets.

Finally, I would offer my profound thanks to all those who have so generously helped with their donations to save the precious mosaics at Tabgha. Any profits arising from the sale of this book are to go Father Tapper at Tabgha Hospice towards the upkeep of the building covering the mosaics and the newly laid out garden, and enclosing wall surrounding same. 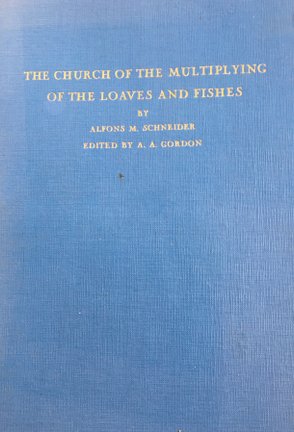 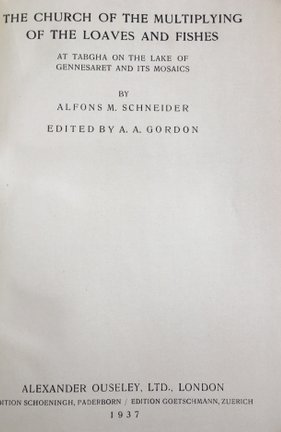 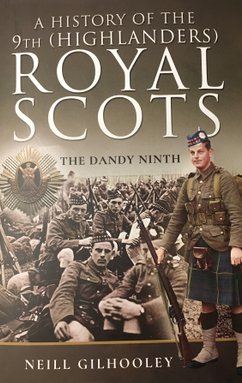 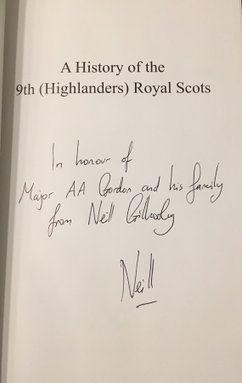 A HISTORY OF THE 9TH (HIGHLANDERS) ROYAL SCOTS
SIGNED AND DEDICATED TO MAJOR GORDON'S FAMILY BY THE AUTHOR.

By the end of 2019, the book 'A history of the 9th (Highlanders) Royal Scots was published. The book is written by Neill Gilhooley who did an amazing job to research the history of the battalion from its origin till the end of the First World War. The book mentions Major A. A. Gordon who was one of the co-founders and the first company officer of A company. It also mentions that Major Gordon met his old comrade Quarter-Master Andrew Gordon at the Belgian/French front and that they discussed there somewhat pitty exercises at Tyndrum and Stobs in the 'old day's'. They both agreed to 'bless ignorance'.

Only a few books about the 9th Royal Scots were ever published in history, being the one by its commander James Ferguson in 1909, the only that had mentioned Major A. A. Gordon till this time.

The society bought a number of books with the publisher and had them signed for board members by our member Neill Gilhooley. One of which is dedicated in honour of Major Gordon and his family and will for always kept in the library of the society.

The book is a real must for any enthusiast of Scottish military history.

BOOKS ABOUT THE HISTORY OF THE 9TH ROYAL SCOTS

In 1909 James Fergusson founders of the 9th Volunteer Battalion Highlanders the Royal Scots published a chronicle account of the military history of the battalion. The book holds several photographs of his personal collection, featuring Major A. A. Gordon some 8 times. The book gives all the commissions of the officers and their personal history with the battalion.

James Fergusson became prior of his commission the Sherriff of Argyll and was graduated as a lawyer. He has commissioned the commander of the 9th Royal Scots on 24 July 1900. Because of his connection with the court, it is not surprising that many of the officers where also lawyer. One of them being the later famous Captain Alexander Taylor, who unfortunately died in the Scarpe Valley on 27 April 1917, after having fought in the most gruesome fights of the First World War. 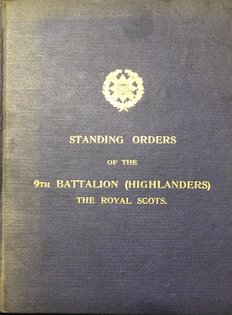 Standing order of the 9th Battalion (Highlanders) the Royal Scots is not a reference work but an actual guide for the men of the battalion to follow instructions accurately. This edition was written by Lt. Colonel A. S. Blair, commanding officer of the battalion, in august 1913. Alexander Stevenson Blair was commissioned as a captain in the battalion on 12 December 1900. Prior to his commission, he was a colleague of Ferguson and of course a lawyer. From 1915 till 1917 he served in France during the First World War and was mentioned in dispatches twice.

The guide holds 14 sections and several appendixes. On the front page, the name D. Bell was written together with the date 1914. From Mr. Gilhooleys index we found an officer David Bell who was commissioned a 2nd Lieutenant in the battalion on 31 March 1909 and served as a captain in the First World War, where he was wounded and his leg had to be amputated. 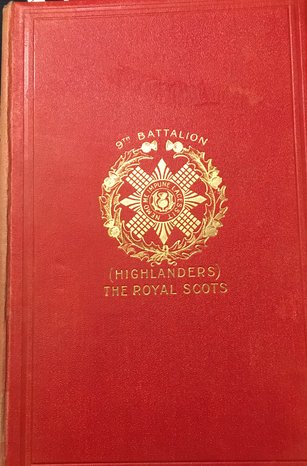 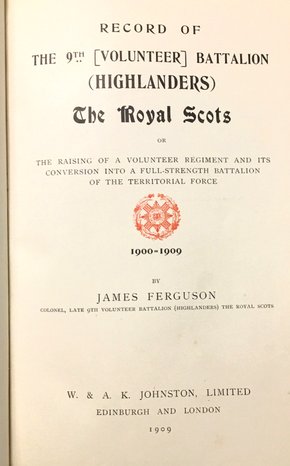 This book about the history of the Gordon Highlanders is written by the grandson of Brevet Colonel William E. Gordon VC. The book gives a wonderful account of the full history of the battalion and their achievements. The edition holds also a black and white photograph of the painting of William E. Gordon which was painted during his captivity in the First World War and is now in the collection of the Gordon Highlanders Museum in Aberdeen.

We were unfortunate enough to find a flat signed edition of the book. 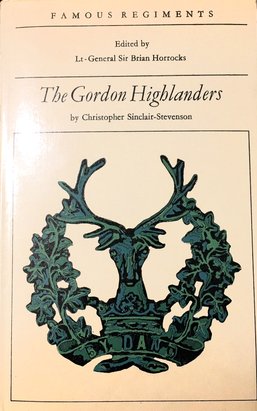 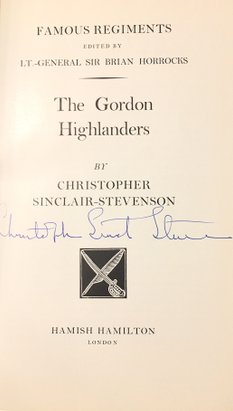 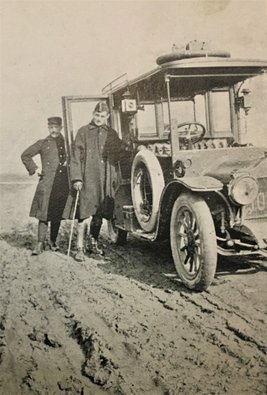