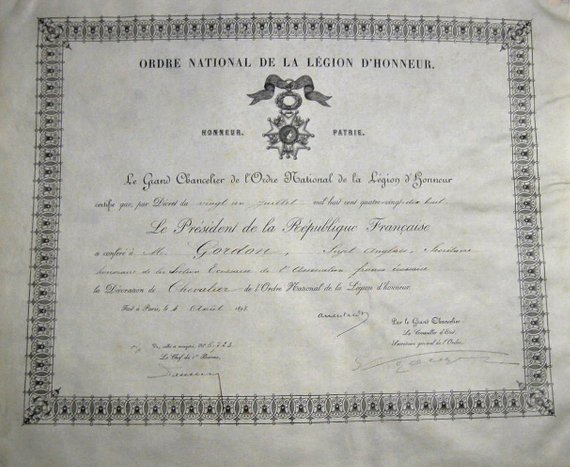 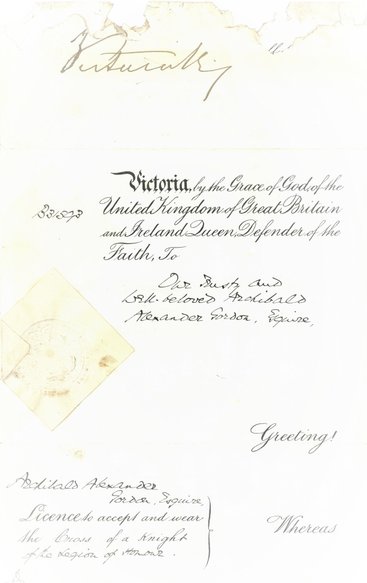 Certificate for the permission to wear the foreign French knighthood order L'egion d'Honneur. 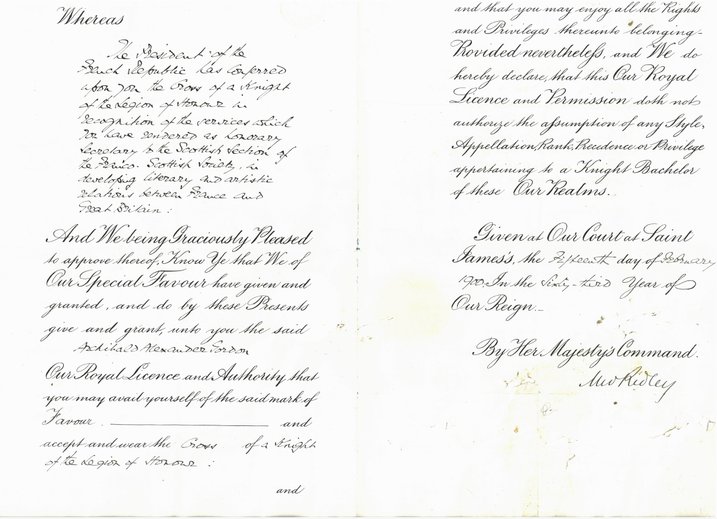 CERTIFICATE FOR A KNIGHT OF GRACE IN THE ORDER OF THE HOSPITAL OF ST. JOHN OF JERUSALEM 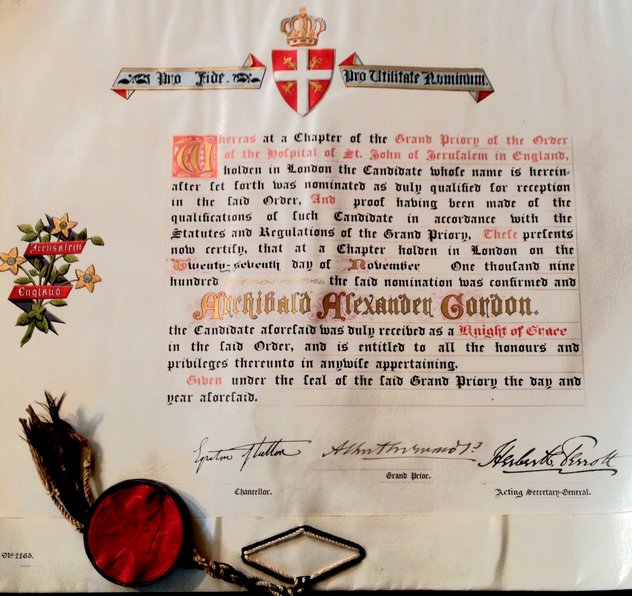 The certificate was awarded on 27 November 1900. 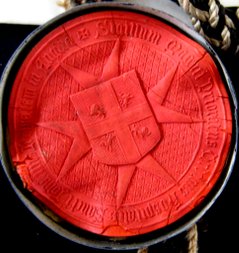 CERTIFICATE TO THE ITALIAN KNIGHTHOODORDER THE ORDER OF THE CROWN - 1905 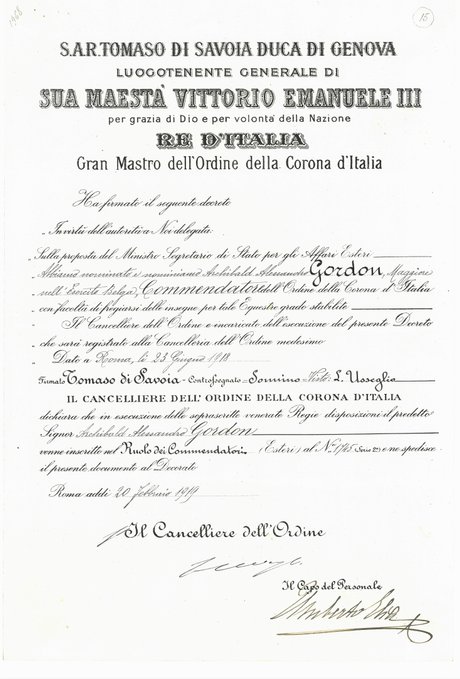 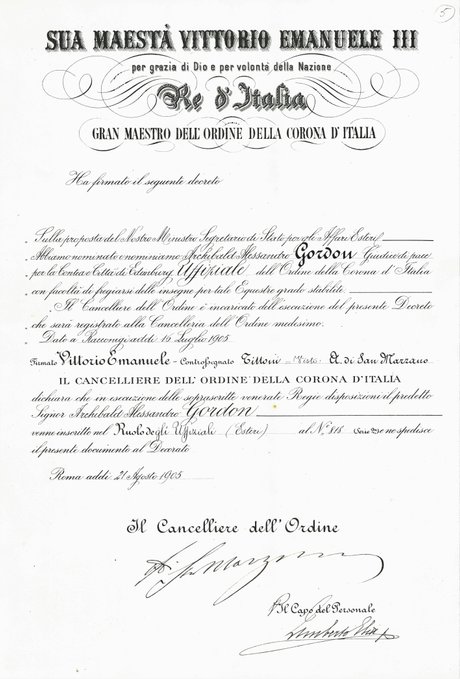 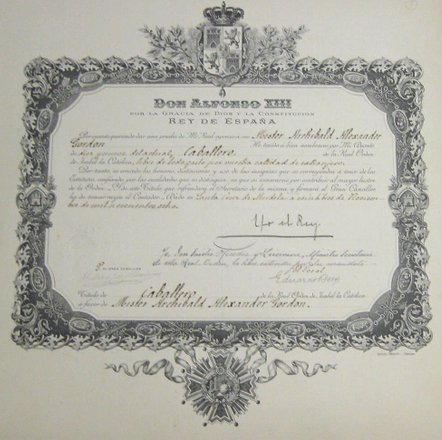 CERTIFICATE FOR MEMBER OF THE VICTORIAN ORDER 1908

Major Gordon was decorated with the MVO on 28th of September 1908 by King Edward VII for his involvement in founding the Scottish national monument for Queen Victoria being Queen Victoria School at Dunblane.

During the ceremony, Major Gordon was accompanied by his older brother (later Colonel W.E. Gordon VC). 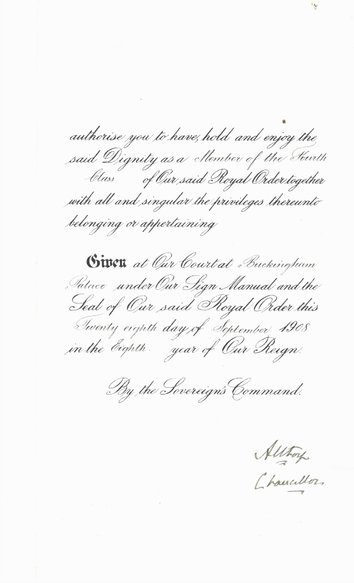 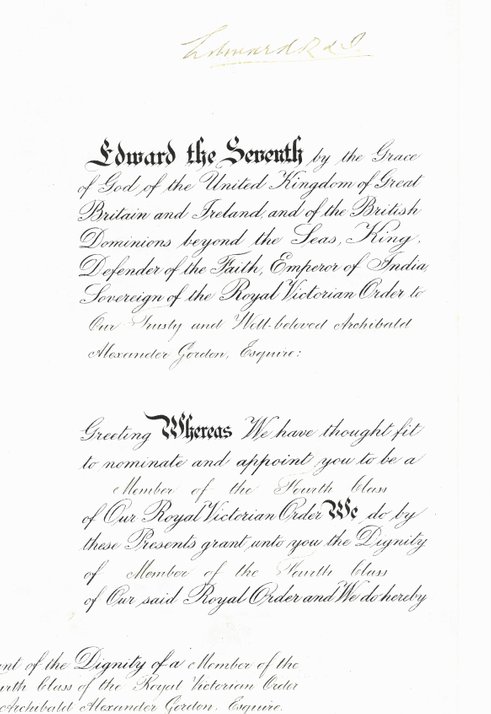 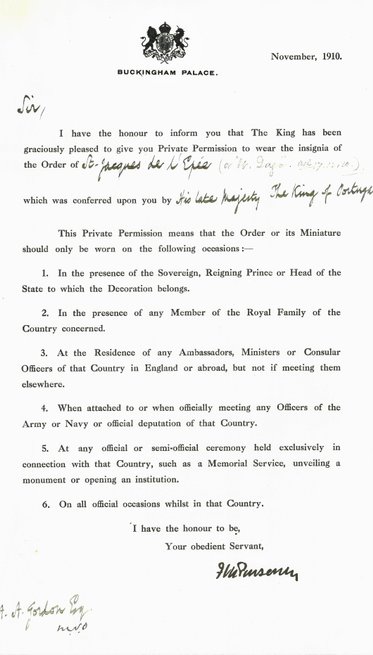 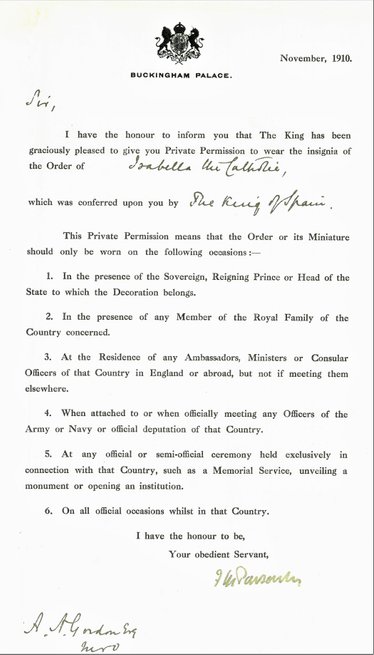 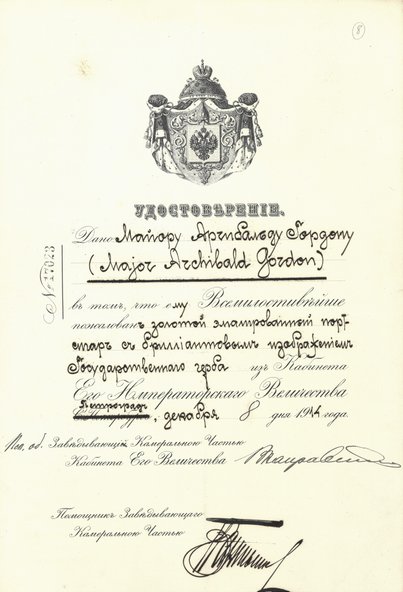 This is given to Major Archibald Gordon in proof that he was most graciously granted from the cabinet of his Imperial Majesty, a golden enamelled cigarette case, ornamented with the Russian arms in brilliant. Petrograd in December 1914.

Acting prince for the on the ...(?) Division of the cabinet of his majesty V. Naprovnih (?)

assistant director of the Division. Bentusheff (?)

Major Gordon states further that the gift was no utility gift, as the extinct enamel is apt to splinter all over even with a slight knock or fall. He also mentioned that he receipt of very similar gifts from States of which the ruler of there respectively was politically and cruelly murdered.

On the certificate, Major Gordon's name is translated in Russian as:

The document was signed by the transitional government after the Russian Revolution in Petrograd (temporary name of St. Petersburg).

On September 1, 1917, Major Gordon was sent a certificate in Russian and a French translation which informed him that the new government has decorated him in the Imperial Order of Saint Anne (2nd Class).

The certificate reads:  I declare in name of and with the approval of the provisional government since June 19, 1917 (July,2) that Major Gordon, in service of the English Army, attaché à la Maison Militaire du Roi des Belges, receives the order of Saint-Anna 2nd Class for his war performances and other services to the Russian Army. 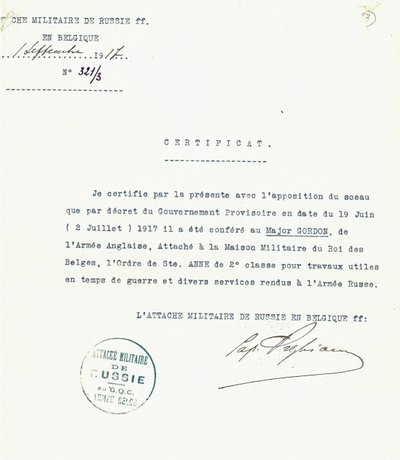 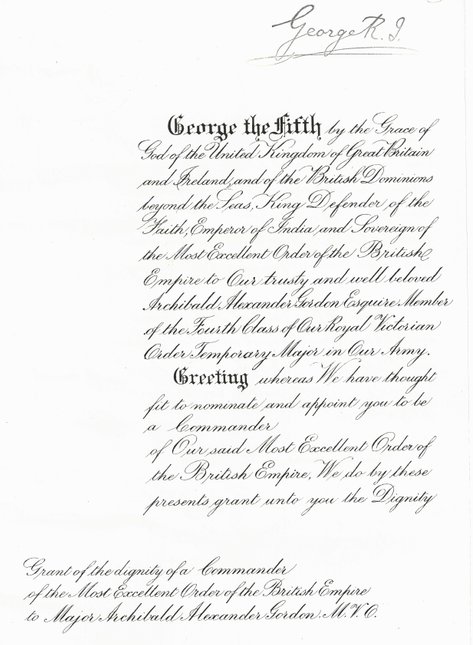 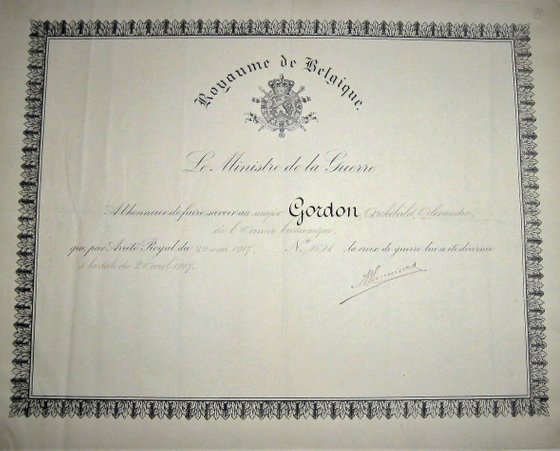 BELGIAN CERTIFICATE FOR KNIGHTHOOD OF THE ORDER OF LEOPOLD (KNIGHT) 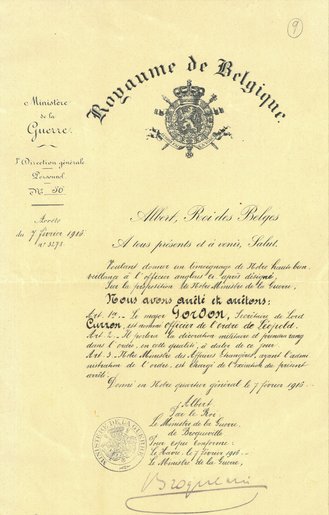 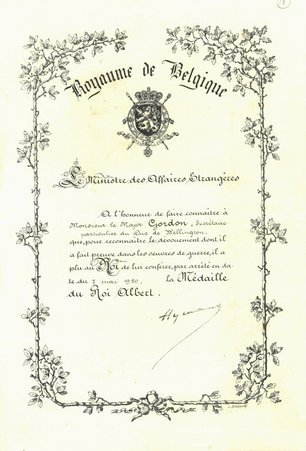 The king Albert medal was established by royal decree on 7 April 1919 and awarded to Belgians and foreigners who were exceptionally meritorious in promoting, organising or administering humanitarian and charitable work that assisted Belgians in need during the First World War 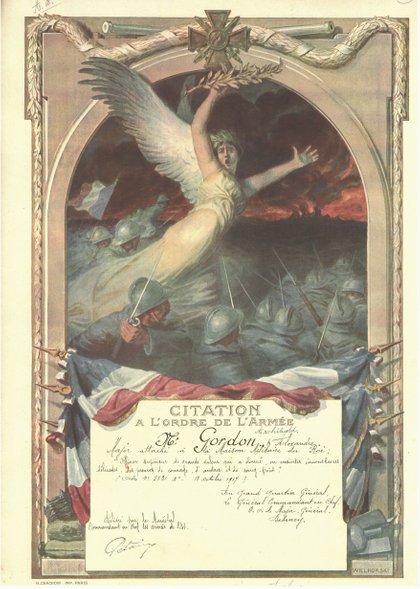 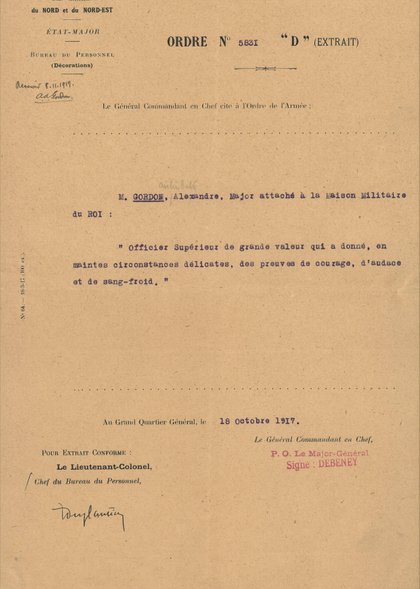 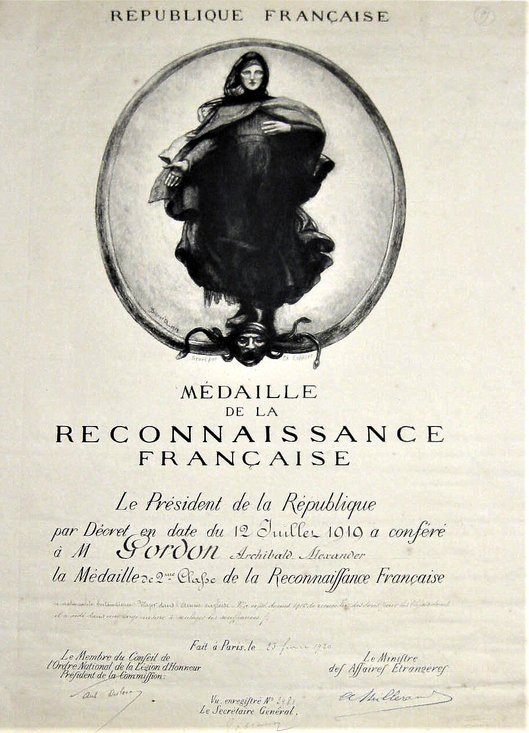 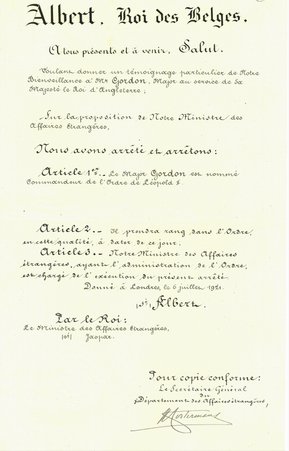