The cookbook was donated by the Gordon family on the end of 2019, as an appreciation of the work done by the society. Although we were aware of its existence, we never actually had a look at it, until we opened the envelope when it arrived. Once we started to explore the book, we encountered many different handwriting and dates. While looking at the dates we made a timeline from 1890 till 1920. From the start, we had two persons in Gordon's family that got our interest in identifying the writer of the cookbook. This being Lizzie Maude Smith and Major Gordon's mother Emily M. Dick. Although Major Gordon has certainly written some recipes in the book, the majority of the handwriting is definitely not from his hand. One of the main thoughts that the cookbook was of Lizzie M. Smith/Gordon is because the book contains some handwritten pages of a Sunday School from 1890 and 1891.

The writing of 1890, mostly biblical, has the handwriting of a young person and is written with a pencil. The writing of 1891 is written with an Inkpen and bares the town name, Darlington. We decided to focus our first research on Lizzie M. Smith/Gordon and found that the writing of the Sunday School class' stoped in March 1891. We know that Lizzie got engaged with A. A. Gordon in the same year and got married in 1892. The possibility that the writing is one of Major Gordon's children is rather impossible because William and Edmund weren't born yet. The 'Cookbook' contains other than handwriting recipes also cut out articles. Some of the recipes are written by the owners. One of which we can connect to the Gordon family is the alias Hellie Gordon, nicknamed after Helene Gordon, Major Gordon's youngest sister.

On 7th February 1890, a biblical verse of H. Luke VIII was written in the cookbook in pencil. The verse tells about the duties of a farmer who has to plant the seed and rely on the power of God that it would grow. From there he can only wait. The second writing was written in the district of Darlington on the 26th of March 1891. Here the verse of Joshua III is written with an Inkpen: "Sanctify yourselves for tomorrow the Lord will do wonders among you.” In the census of 1891, we found Lizzie Maude Smith registered as a visitor of Darlington, so we can honestly say that it is certain that she is the author. He birthplace is mentioned as Twickenham, Surrey, England and she is listed as a visitor of Charles Herbert Backhouse, who was the headmaster of Stanhope Road 113. Lizzie, however, was accompanied by her twin Francis Alma Smith who is also registered as a visitor in the house. Charles Backhouse is listed together with his wife, two sons and two daughters in the census. Charles was the son of banker and Member of Parlement Edmund Backhouse and brother to Sir Jonathan Backhouse 1st Bt.

Francis Alam Smith later married on 3rd September 1909 with the Advocate John Kirkpatrick, who was 20 years older than her. The exact relationship between the Smith family and the of Backhouse hasn't been found yet. However, we do know that Lizzie and her twin Francis didn't stay very long with the Backhouse family, as in the same year she was at Wimborne, Dorset where she met with A. A. Gordon and got herself engaged with him when visiting Colonel Randall (?) here.

PAINTING OF KING ALBERT I OF BELGIUM BY A. LANGFIER   1918 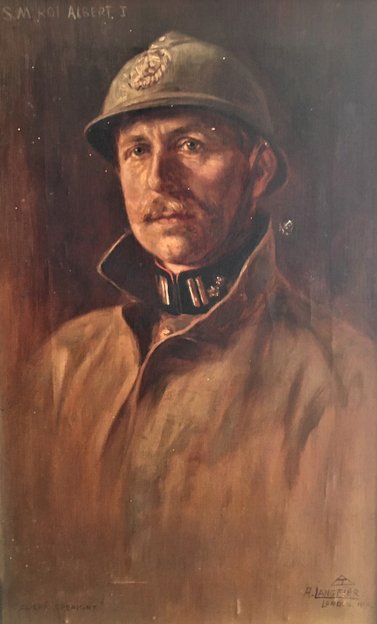 Oil painting from King Albert I of Belgian in the style of Richard N. Speaight by the known British artist A. Langfier. Richard N. Speaight was a British artist who was born in London and was commissioned to make a portrait of King Albert I of Belgium in 1917. The painting was later used for some Belgian stamp series. The painting in the Kings Messenger Collection was executed by A. Langfier also a London artist who inspired the commission on the painting of Speaight, as he states in the left under corner 'Cliché Speaight'. Whether Major Gordon commissioned the painting himself is unknown. The fact that it was found in his personal archive, makes it a great asset in the Kings Messenger Collection.

The painting is signed and dated 1918. On the back of the painting a label with the following is printed: