THE ROYAL GIFTS are presented to Major A. A. Gordon during his lifetime from European monarchies. These artefacts are the most prestige and important belongings of the Kings Messenger Collection. However, there are many others still lost and we are in a constant lookout for them.

This original signed photograph was given to Major Gordon during the Belgian Royal visit in 1921. The photo is mentioned as follows in Major Gordon's book Culled from a Diary:

The picture is the most praised item in the Kings Messenger collection because it was the first item we have ever managed to acquire from Major Gordon and was the main item that started the research of his history! The whole foundation of the Major Gordon society is built around this picture together with the possibility it has shown in commemorating both Major Gordon and King Albert I in this way!

In 2019 the picture was reframed to preserve it for future generations. Its original silver (royal) frame resides still in the interior of the Gordon family. The picture is now placed in a customized sterling silver frame.

DESCRIPTION: "To Major A. A. Gordon. In grateful memory of your valued services during

our visit in London - Albert" 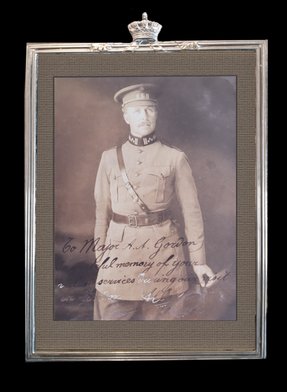 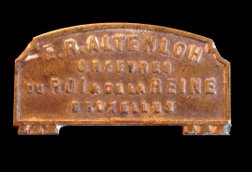 Reconstruction of the picture in it's original frame. This silver frame was produced by E.R. Altenloh in Bruxelles who were the purvoyer to the court. 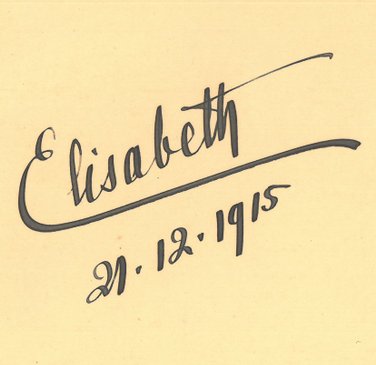 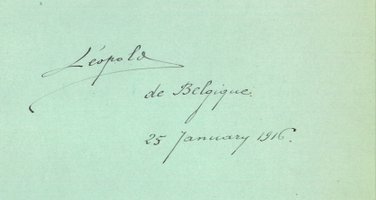 Signed papers from Major Gordon's guestbook with the signatures of Queen Elisabeth dated 21 December 1915, probably signed during the Christmas occasion. The signature of the Princes Charles en Leopold, later King Leopold III. The dates of the signatures of the princes differ from those of the Queen, which is understandable because most of their education was done in England during the war, so there were not always around in La Panne. The only signature that is missing is that of Princess Marie-Josée, by which Major Gordon most certainly had contact during the war, as stated in his book, Culled from a Diary. We also have to remind ourselves that the princess was the youngest and only 12 when the war ended.

LARGE SILVER QUAICH PRESENTED FROM THE GERMAN DUKE AND DUCHESS 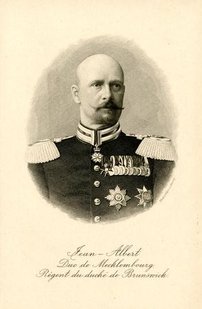 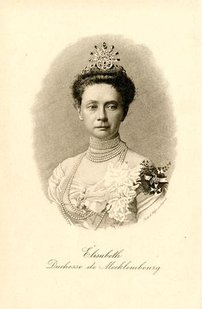 In the late autumn of 1904, Duke Mecklenberg and the Dutchess visited England and Scotland. Major Gordon, then Mr. A. A. Gordon acted as their cicerone in Scotland. He met them at Waverley Station, Edinburgh and he escorted them to the Caledonian Hotel. Major Gordon guided them for about ten days both near and far from Edinburgh. De Duke and Duchess' Master of the Household was the huge and delighted Von Rantzau, a distant connection of Bismarck. One day during the visit was devoted to the Earl of Wemyss at Gosford House, East Lothian. Major Gordon knew that the Duke was not exactly persona grata with the British Royal Family and he knew that their Royal Highnesses the Duke and Duchess of Connaught were guests there at the time. On entering the great hall Major Gordon noticed that two figures hurriedly got themselves behind pillars. Later he told in his memoirs that the visit of Mecklenburg took Their Royal Highnesses by surprise and it was they who tried to conceal themselves behind the pillars. At Gosford, Duke Mecklenburg met with the Earl of Midleton, Secretary of State for India, and Mr. and Mrs. Asquith.

“I found Their Highnesses (Duke and Duchess of Mecklenburg) most kind and thoughtful. I dined with them every night in Edinburgh, and they invited themselves to my home for tea one day so as to meet my wife and our children. When they left Scotland en route for Germany they presented me with a huge silver quaich some nine inches in diameter and delightfully inscribed, as was also a very large and beautiful etching of the Duke and a smaller signed portrait of the Duchess.”

The quaich measures 28.8cm including the handles, 20cm in diameter, and 9cm high.  The weight is 22.5 oz troy.  The hallmarks are Edinburgh (the castle), thistle (assay office silver mark), 1898 (date letter r), Britannia (Britannia silver being higher than sterling silver content: 958 rather than 925), H&I (Hamilton and Inches, who hold the Royal Warrant as a silversmith to the royal family, maker's mark).

RECTO: "To Mr A. A Gordon in grateful remembrance of our charming stay at Edinburgh, 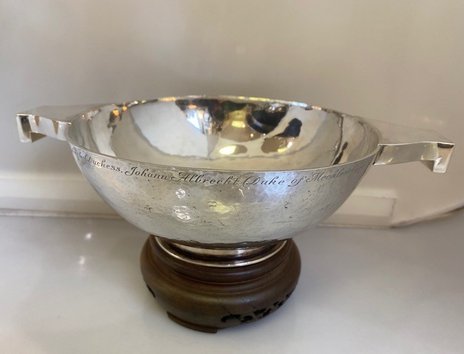 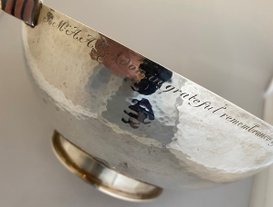 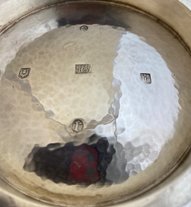 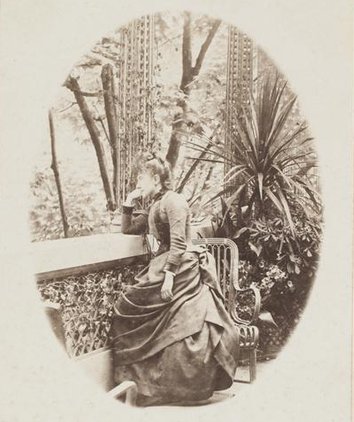 The spoon was sent to Major Gordon on the 22th September 1915 from Paris, by the Comtesse Ghislaine De Caraman Chimay, who was best friends with Queen Elisabeth of Belgium.

The following note came with the spoon: "Dear Mr. Gordon, Please accept this little Parisian Souvenir with my best remembrances."