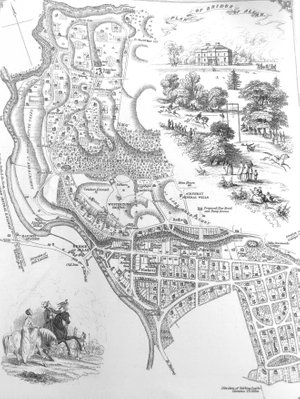 Bridge of Allan owes its name to the River Allan, three miles to the north-west of Stirling. In the 16th century the place consisted of two small communities being Inverallan and Pathfoot. In 1520 a stone bridge was constructed to cross the river Allan more safely.

In the 17th and 18th century Bridge of Allan was occupied with farmers and miners who worked in a copper mine on the steep hillside behind the village. The mine ceased production in 1807 and the mine became flooded.

During the Victorian era, it was found that the water had a high salt content, which was very popular by the Victorians idea of its laxative powers and health-giving. The town became one of Scotland's most successful spa towns and became later a holiday resort. The town was transformed into a model town by its designer Major John Henderson, of which the main, Henderson Road was named. Both sides of the road were built with stone hotels which were subscribed as rooming houses. In 1864 a large hydropathic hotel was build in Bridge of Allan and became a rival to it, neighbour, in Dunblane. It was built on the hillside above the town and was given the name the Ochilpark Hydro, which was changed to the Allan Water Hotel in 1893.

The most prestige hotel was the Royal Hotel of Mr Philps in which Queen Victoria stayed on her royal visit to the town. Other famous visitors where Charles Dickens, the Wordsworths and the Stevenson family of the lighthouse building fame.

A horse-drawn omnibus was instituted for the holidaymakers which plied five times a day between Stirling and Bridge of Allan. The railway arrived in 1848 and made a connection from Edinburgh to Glasgow and a station was built. Each train was met by horse-drawn buses who brought the visitors to the town. In the 1890s a single track tramline with open-top horse-drawn carriages was adopted but the 1920s discontinued because of the arrival of motor buses.

Outside the water activities and the walking in the hills, Bridge of Allan was also a place of many sports like fly fishing, golf and tennis. The Scottish Lawn Tennis Championship was held here multiple times. Winter frosts brought the excitement of curling and ice skating on frozen ponds.

MAJOR GORDONS SERVICE IN THE COMMUNITY

BRITISH LEGION AT BRIDGE OF ALLAN

On 25 January 1930, the annual meeting for the branch of Bridge of Allan was held in the Town Council Chambers.

ARMISTICE DINNER AT BRIDGE OF ALLAN

On 13 November 1930, the annual Armistice Dinner of the Bridge of Allan Branch of the British Legion took place in the Queen's Hotel when there was a company of between fifty and sixty present.

Col. H.B. Spens, DSO, presided and was supported by Lt. Col. W. Davis, Major A. A. Gordon, Major M'Callum and others.

Major Gordon brought the toast "The Burgh of Bridge of Allan"

The annual meeting of the 11th Troop of Boy Scouts (Bridge of Allan) was held in Council chambers. Major A. A. Gordon presided.

Dr Tindal, Fidra, Bridge of Allan, delivered an interesting lecture entitled, "Here and There" to the members of St. Saviour's church in the hall. Dr Tindal manipulated the lantern himself.

The lectured was thanked by Major A. A. Gordon.

PHOTOGRAPHIC ART AT BRIDGE OF ALLAN

The eighth annual exhibition and international salon held by Bridge of Allan and District Photographic Society was opened in the Royal Halls by Lady A. Kay Muir of Blair Drummond in presence of a large audience.

Provost Dunbar presided and accompanying him on the platform were Lady A. Kay Muir, Sir A. Kay Muir, Major A. A. Gordon, Dr. W.H. Welsh and Mr Geo J. Hughes.

Twenty different countries were represented in the exhibition with many world-famous artists.

The annual meeting of the Airthrey Castle Curling club was held in the council chambers, Bridge of Allan - Dr. J.S. Mitchell presiding.

It was decided to enter four rinks for the Grand Match and three for the Scottish Central Province match at Ardoch and two for the match on artificial ice of the same province. Major Gordon was elected as a representative member and as honorary secretary.

In 1934, Major A. A. Gordon was a guest at the Stirling Garden Party which was held at Stirling Castle. Over 450 guest attended the annual party given by the officers of the Depot Argyll and Sutherland Highlanders. The guest arrived when the sky cleared from a raining morning and guest were entertained on there arrival with music from the band of the 1st Argyll and Sutherland regiment from Edinburgh. In the late afternoon the earl of Mal and Kurrie, Horeditery keeper of the castle arrived and was welcomed by Major A. Macdonald Ritchie, commander of the battalion.

Votes of thanks were proposed by Major A. A. Gordon.

General Sir Spencer Ewart, commanding the troops in Scotland and superior officer of Bt. Col. W.E. Gordon from 1916 till 1919 was married to a lady of Bridge of Allan, being a daughter of Major Platt, who lived at Dunnallan house. His father, the late General Sir John Ewart stayed a long time in the "Bridge". He was a veteran of the Indian Mutiny where he lost an arm and became a person of interest in the village.

Corporal A. A. Abercromby H.L.I. (wounded)

At the annual meeting of Bridge of Allan Rugby club

Major A. A. Gordon was elected a Vice President