MAJOR GORDON IN THE ROYAL COMPANY OF ARCHERS 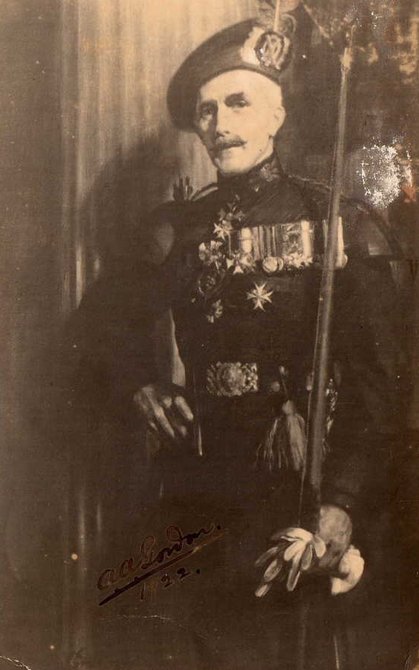 Major Gordon was a member of the Royal Company of Archers in 1896. The Royal Company of Archers is a Scottish army unit, who had the ceremonial purpose of Guarding the Monarch during his visit to Scotland. The unit is also acknowledged for their members great skill of archery. Although the unit was formed in 1822, during the reign of King George IV, it can be traced back to the 17th century. Major (then Captain) Gordon was a member of the unit in 1896, so he served under Captain-General William Montagu-Douglas-Scott, 6th Duke of Buccleuch who was the commander of the unit from 1884 onwards. Gordon mentions two fellow archers he served with in his book being: Lieutenant-Colonel James Clark who was killed at the first battle of Yper in 1915 and Lord Dalmeny - 6th Earl of Rosebery who served as an Aides-De-Camps to General Allenby from 1915 till 1918 on the western front and later in Palenstine. Occasional members who could be part of the company during Gordon's presence are:

- Lord Glenorchy, The Earl of Breadalbane and Holland (Brigadier-General in the company of Archers)

The Company of Archers was established in 1822 during the reign of King George IV. The company had to  provide a personal bodyguard to the King on his visit to Scotland. The visit was historic because it was the official visit to Scotland in nearly two centuries. The previous visit was by King Charles I for his Scottish coronation in 1633. Today the company still exist in a ceremonial unit, who is transformed in the Queen's Bodyguard For Scotland and is located in Edinburgh.

The origins of the company is traced back to the 17th century, when so called Wapinshaw where organized in Scotland, where civilian presented weapons and where part of some sort of militia. The Jacobites used the laws of Wapinshaw to form a military corps under a pretext of sports and recreation. A society for encouraging and exercising archery had already been formed in 1676, as a private archery club. The company consisted mostly of distinguished nobles and gentlemen. It was only until 31 December 1713, when this society obtained a charter under the Great Seal of Scotland, that established the society in a Royal Company.

This meant that the company became an independent force, that had commanding officers, military rangs and had the right to conduct exercises and weapon shawing as much they thought to be convenient.

The company organized every year a public parade until 1734. They only where reinstituted after the Napoleonic Wars.

On 15 August 1776 the current base for the company was erected in Buccleuch Street, Edinburgh and later named Archers' Hall. Behind the building lays The Meadows or Hope Park, which was named after Sir Thomas Hope, who converted it into an archery ground. The structure of the organization has the following positions for officers; one Captain-General, four Captains, four Lieutenants, four Ensigns and twelve Brigadiers.

The Company forms currently a part of The Queen's Household in Scotland.